when they say “it’s not about the money," check your wallet 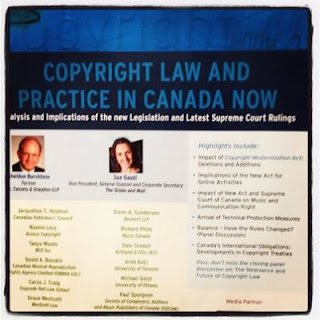 Two weeks ago, I traveled to Toronto’s far north for a lunch presentation (recorded on video as part of the excellent IP Osgoode Speaker Series) from the Honourable Mr. Justice Marshall Rothstein of Canada’s Supreme Court. Justice Rothstein was the author of the dissent in the recent 5-4 SCC fair dealing decision that went against the interests of writers and publishers, and is right now being broadly misinterpreted by shortsighted educational administrations keen on saving money.

Justice Rothstein was wise, charming and occasionally hilarious in his presentation. “Everyone at the Supreme Court thinks they’re an expert on copyright,” he quipped. On the topic of whether or not broad unlicensed classroom copying has suddenly been legitimized by the SCC, he referred to his dissenting opinion in the Access Copyright case, “private study couldn't mean hundreds of thousands of copies made across a province as part of an organized program of instruction.”

Last week, I attended a two-day conference in Toronto examining recent changes to Canadian copyright law (including the SCC decision above). The meetings took place in the steel and glass canyons downtown, were filled to capacity with lawyers (and the occasional association executive), and provided little assurance that the quest for a truly fair copyright regime for the digital age is anywhere near over.

The one certainty delivered at the conference is that everything about copyright is even more uncertain than it was before the passing of Bill C-11, Canada’s Copyright Modernization Act. Key terms have been left undefined, key meanings unclarified. It looks like Canada is headed into a sustained period of legal wrangling over these terms and meanings – a period that will further confuse the already confused, and cost absurd amounts of time and money.

And speaking of money, I came away from that conference with two key learnings about Canada’s freecult – those academic theorists railing against copyright and the “legacy” rightsholders who insist on protecting it. Firstly, they haven’t a clue about the real economy they are trying to disrupt, and secondly, when they say “it’s not about the money,” everyone should fly to Vegas immediately and place a very large bet on “it’s about the money.”

Ariel Katz, a law professor at U of T most famous (to me) for his offensive tweets, drew a lot of shaking heads when he questioned whether or not the Canadian publishing sector would even notice a loss of collective licensing revenue (calculated loosely (very loosely) at about $40 million per year). Admitting that he’d not actually done any real research on the question, Katz declared he’d taken a quick look at some earning statements of large publishers and wasn’t convinced $40 million would be missed. That’s right, to Canada’s freecult - all safely and comfortably tenured professors - $40 million is a trifle that no one in writing and publishing should worry our little heads over.

Michael Geist, on the other hand, may have inadvertently drawn back the freecult curtain with his unexpected admission that educational administrations may not quite be the "freedom" fighters the freecult would like them to be. In the middle of a predictable panel conversation about how copyright disrupts educational access and the freedom of students to learn, I wondered aloud if educational fair dealing is all about access and freedom, and not really about money, why is there so much focus on how much collective licensing costs (that insignificant $40 million again). Geist allowed that while students and professors may focus on access, it is possible educational administrations do consider the money to be an important factor. He then said something I found startling.

Geist mused that educational administrations might be more likely to sign collective licences if they were priced lower. Not at $20 per student, is how he put it, but perhaps at $5 to $10 per student.

Strange... the new fair dealing policies being drawn up for K-12 schools, colleges and universities around Canada are meant to be in place of licensing, aren’t they? And they seem meant to declare that schools can now depend on the law to excuse them from any price for those formally licensed uses, don't they? That’s certainly the non-binding legal opinion Professor Geist has been offering through his blog for months now, unless I've been reading him incorrectly.

Why would any school sign any licence at any price if the law told them they didn’t have to? I mean I know they still need to sign licences, I’m betting Justice Rothstein of the Supreme Court of Canada thinks they still need licences, but a freecult leader also admits the likelihood of licences while continuing to suggest they are unnecessary? How is that possible?

I think the answer is obvious. The freecult, with their superficial grasp of cultural economics, and their loose analysis of actual law, doesn’t have any idea what their advice will do for education. One wonders, as well, if they care.

A great piece of speaking sense to uninformed power. Thank you. I have posted it to my FaceBook page, and look forward to getting to know you as my TWUC Exec Direc. - George Payerle

Thanks for the comment, George. And I look forward to meeting as many TWUC members as possible.

What I really want to see more of going forward are individual writers like yourself speaking out publicly about your rights - even if it's only by commenting on blogs like this.

Too often, copyright is portrayed as a corporate luxury. People need to understand that it is the legal framework around a universally recognized human right for individuals.