I have to say, I went back and forth on whether or not I'd write this post. I'm suffering a bit of copyright and freecult fatigue, what with all the copyright-related events of the past year. And, as astonishingly nasty as the freecult attack on professional writing and publishing in Canada has been over this past year (decade), there comes a point when you just get tired of listening to the shrieking crusaders who want to take away your rights.

And then those same crusaders smirkingly portray themselves as Nazis, just before Yom Kippur. From Twitter: 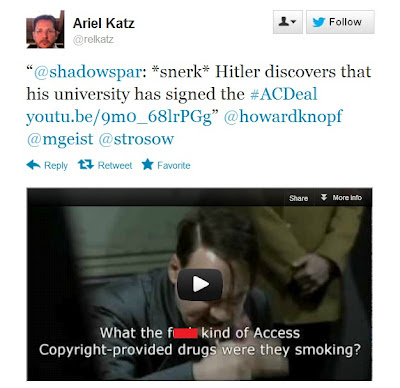 I know, I know - it's a tired old meme on the web. And that would, maybe, be an acceptable rationalization if the video didn't also contain vile, profane and unjustifiable attacks on the collective that represents my legal rights as a professional cultural worker. You can see from the subtitling above the kind of high-minded, fact-based criticism the video intends to make.

In case anyone's wondering who's involved in the sharing of this "hilarious" satire, you'd be excused for assuming it's a group of prepubescent boys.

Ariel Katz @relkatz is an Associate Professor at the Faculty of Law, University of Toronto. He holds the Innovation Chair in Electronic Commerce. He has previously compared Access Copyright to an organized crime syndicate, and last week accused the collective of terrorizing universities.

Michael Geist @mgeist is a law professor at the University of Ottawa. He is Canada Research Chair in Internet and E-commerce Law.

Samuel Trosow @strosow is an Associate Professor at the University of Western Ontario.

Rick Scott @shadowspar is, according to his blog, a "Canadian philosopher-geek who's profoundly interested in how we can collaborate to make technology work better for everyone. He's an incorrigible idealist, an open source contributor, and a staunch believer in testing, universal access, and the hacker ethic."

UPDATE: On his blog, Ariel Katz has issued an apology concerning his retweet of the Hitler parody video. Those interested in the apology will have to read past his attacks on me and Barry Sookman, all the way to the end of the posting.
Posted by John at 4:45 PM