about the book room 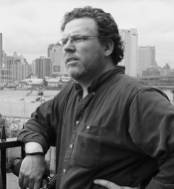 The Book Room is the personal website and blog of me, John Degen.

I am a writer and cultural worker living in Toronto, Canada. I have three books in the world and countless articles in newspapers and magazines across Canada. My novel, The Uninvited Guest, was shortlisted for the 2006 Amazon.ca First Novel Award and is currently being translated into Croatian.

My two books of poetry are, Animal Life in Bucharest and Killing Things. I am currently completing my second novel and working on a new collection of poems.

I publish a regular audio podcast, also called The Book Room, in which I interview other writers and poets about their lives and their work. You can subscribe to The Book Room on iTunes or through the hosting feed here.

I work at The Writers' Union of Canada, as Executive Director. The opinions expressed on this blog are mine and do not necessarily represent those of TWUC.

Thanks to the good folks at The Devil's Artisan for the dodo image in my header.

•offensive to an individual or an organization

•personal attacks, disrespectful or discourteous behavior, or those that are rude in tone

•hateful or those meant to harass or intimidate

•serious, unproven or inaccurate accusations against individuals or organizations

•abusive, such as comments that merely rant or to which it is not possible to produce a useful response

•conjecture, nonsense, such as comments that contain unsubstantiated allegations

I reserve the right to select or to refuse to post comments that I consider to be inappropriate. If you have been asked to stop posting comments on my blog, please respect the request. I don't make such requests lightly, and have only done so in cases where repeat commenters are extraordinarily rude, have run the course of an argument and have, in my opinion, nothing new to contribute. I do not erase or censor previously published comments, and I respect everyone's right to free expression.