poetry the way it's meant to be enjoyed 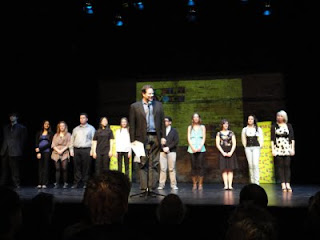 Last night I had the privilege and the very great pleasure to be a judge for the Poetry In Voice/Les voix de la poesie finals at the Young Centre for the Performing Arts in Toronto. The evening was hosted by Soulpepper Theatre's Albert Schultz, and featured poetry recitations by twelve brilliant high school finalists from around Ontario.

Each finalist came prepared to recite (from memory) three poems from the Poetry in Voice online anthology of classic verse, and were judged on physical presence, voice and articulation, appropriateness of dramatization, level of difficulty, evidence of understanding, overall performance and accuracy.

Congratulations to Grade 12 student Jonathan Welstead from Upper Canada College in Toronto who is the inaugural winner of Poetry in Voice after expertly reciting To a Mouse*, by Robert Burns; The Windhover, by Gerard Manley Hopkins and Preludes, by T.S. Eliot, three poems that pretty much go off the charts for degree of difficulty. 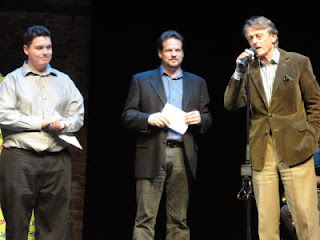 (Jonathan Welstead, Albert Schultz and Scott Griffin, after the judges made their final decision)

I was the English language accuracy judge, which meant that I sat in the third row of the theatre and followed the text carefully to make sure the students read every single word in the proper order. My OAC colleague, Franco-Ontarian Arts Officer Claudette Jaiko acted as the French language accuracy judge. The panel of celebrity performance judges included Karine Glorieux, Dennis Lee, Karen Solie, Robert Lalonde, Diana Leblanc and Élise Turcotte.

I would say it was more terrifying for me than for the kids, but that's impossible. These students had to stand alone on a spotlit stage in front of a packed theatre containing their parents, teachers and classmates, a row of judges, and for good measure Scott Griffin, Margaret Atwood and most of the rest of the Griffin Poetry Trust smiling at them from the front row. They then had to recite and dramatize the likes of T.S. Eliot, Guillaume Apollinaire, Robbie Burns and Edna St. Vincent Millay. Not your average school night.

Scott Griffin is, of course, the man behind this exquisite student-torturing competition; he of the Griffin Poetry Prize and House of Anansi Press. Mr. Griffin's great passion for poetry has brought new life to verse-appreciation in Canada, and he shows no signs of stopping. Poetry in Voice is set to expand into a national competition within two years -- so parents of high school students can soon expect to hear a lot more rhyming and emoting in their homes.

The competition is lovingly administered by three Griffin Trust employees, Francophone Director Sepideh Anvar, Managing Director June Dickenson, and Toronto poet and Creative Director Damian Rogers. I remember talking to Damian Rogers when this competition was just a seed she carried around in her pocket. Look at your flower now, Ms. Rogers. Well done.

* A special shout out to Jonathan Welstead's grandmother, whom I met after the competition. As soon as she began to speak it was clear to me who had been coaching Welstead the Younger on his Robbie Burns Scot's accent and pronunciation. Imagine... he did'na miss a word:

O, what a panic’s in thy breastie!

Good to see young people absorbing the classics. As much as I am a proponent of leveraging technology in life and education, it will all be for naught if all they absorb is the latest twilight saga.

This is terrific John. I can imagne you there hunched over the original poetry and getting to listen to brilliant young people giving voice to it. God, what a great way to spend an evening. Kudos to you for volunteering... this is something I will try to attend next year.Have to say though...Robert Burns Never liked him. And i canna say I ever will.

You certainly made a wise choice last evening. There were nae any poetry in the federal election debate ta be sure!