for the record: the changing tune of educational fair dealing 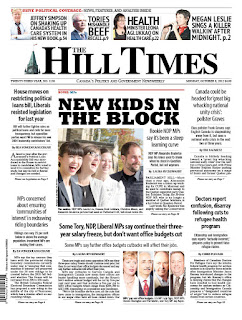 The Hill Times, Canada's politics and government newsweekly, has published an op-ed  in which I note a curiously altered message from educational representatives concerning educational fair dealing.

Before the passing of the Copyright Modernization Act (C-11), educators told the Parliamentary committee that suggested changes to the fair dealing categories "will not impact any of the creators or any businesses at all. Those things will stay intact." They further defined educational fair dealing as "small extracts, one or two pages, two to three pages of works."

Now that C-11 has passed, we are hearing a very, very different message from the educational sector. Fair dealing in education is suddenly being defined as up to 10% of a work, entire chapters, and inclusion of such copying into educational course packs. Far from having no impact on creators or cultural businesses, the post-C-11 definition has already dramatically changed the revenue outlook for Canada's writers and publishers, leaving educational copyright licences unsigned in the midst of a relentless copyright land grab by colleges.

Read the full article in the Hill Times online here.

Of course, before C-11 passed - in fact, way back when the Bill was called C-32 - creator groups expressed concern that just such a land grab was in the offing. They told the very same Parliamentary committee they expected exactly the outcome that has arrived. They were accused of fear mongering by the leaders of Canada's free culture movement.

I think both education and the freecult have some explaining to do to Canada's lawmakers, and I guess Canada's writers and publishers can now expect an apology from those who scoffed at their predictions.


NB: The op-ed originally stated, in error, that C-11 was still awaiting royal assent. In fact, the bill has received assent, and is now law, making retraction of statements before the committee impossible. Thanks very much to Quentin Burgess at Music Canada for the correction.