lame-excuse culture -or- Custer would have been an Internet pirate

Reading a recent paper about peer-to-peer file-sharing and the Greek economic crisis, I was depressed to note how many lame excuses for terrible behaviour are just readily accepted these days, as long as the terrible behaviour involves infringing copyright.

The premise of this "academic" analysis of Greek IP piracy seems to be that one must simply expect and accept outright theft of one's rights in countries suffering economic collapse because "low salaries and high prices" are drivers of file-sharing. As well, non-economic motivators such as a "greater sense of agency and freedom" in the face of "social and political disaffection" can provide ethical cover for unethical behaviour. Completing this picturesque rationalization of outright illegality, the paper's author celebrates the behaviour of filesharers around questions of moral rights. In an absolutely baffling display of ethical gymnastics, we get this:


These moral rights extend to the acts of preparation and circulation of copied materials. Uploaders are regarded as authors of the digitized versions [of illegally copied works they don't own], with authorship derived from the cost, skill, and risk associated with making high-quality new materials available.

Did you get that? Not only is it okay to infringe the rights of true authors because the economy's going to hell; it's also cool to then claim your own author rights over someone else's hard work, as long as you put work into your infringement.

So this is where we are? The freecult is now writing papers for itself, excusing inexcusably illegal behaviour, and claiming their own rights within the broken social contract they themselves have broken. It's kind of like having someone break a promise to you, and then demand that you promise not to tell anyone how they broke the promise. The circle of freecult absurdity is now complete.

An historical lesson in broken promises:

Last summer, on a self-directed tour of the northwestern United States I drove through the Black Hills of South Dakota, Badlands National Park (also SD), the Devil's Tower National Monument (Wyoming) and the Little Bighorn Battlefield (Montana). In so doing, I crossed in and out of sovereignties, sometimes on State land, sometimes on Native land, often seemingly on both at once. Unless I was paying particularly good attention to small roadside signs, the borders between these sovereignties were mostly invisible.

Coming out of that trip, I did an awful lot of reading about Sitting Bull, George Custer, and the Battle of the Little Bighorn. That prompted an awful lot of thinking about how people get along with other people, how they don't; how they make promises about doing so, and how they break those promises.

The Battle of the Little Bighorn, sometimes called the Battle of the Greasy Grass, or Custer's Last Stand, is a fascinating historical moment for examining promises, promise-breaking, and the reasons we give when we intend to break promises. It occurred to me that we naturally rank our reasons for promise-breaking on a spectrum with good reasons at one end and lame excuses all the way near the other end.  Lame excuses are not in the very last position because that spot is reserved for "because I can", the ultimate promise-breakers rationalization, no excuse at all. 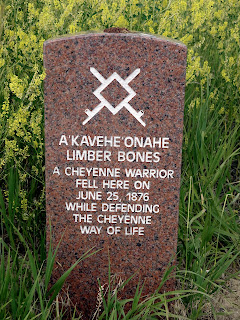 There were a number of broken promises leading up to the defeat of the US 7th Calvary by Lakota, Northern Cheyenne and Arapaho warriors above a bend in the Little Bighorn river on June 25 and 26, 1876, and the historical perspective of over 136 years lets us place those promises on the spectrum above with some degree of agreement.


Sitting Bull and his large encampment of Sioux were (arguably) under successive treaty promises to not roam the plains hunting buffalo and interrupting the determined western advancement of European settlement. According to a number of treaties, Sitting Bull's people were expected to give up their traditional lifestyle and live on large reservations instead. Those reservations were to include the sacred (and gold-rich) Black Hills region of what is now South Dakota. The problem with those treaties, of course, is that they were almost never negotiated with authoritative representation by the Sioux, and they were regularly broken by the US itself. Therefore,

Sitting Bull's good reason for his broken promise was:


I never actually made that promise, and even if I did, you folks nullified the treaty by breaking it first. From now on I will do as I choose, and live with the consequences.


Captain Frederick Benteen, one of the Cavalry commanders under Custer appears to have broken a promise when he defied a direct order from Custer (in the form of a hastily scrawled note to "come on... be quick..."), by stopping partway along the Little Bighorn to save the besieged companies of Major Marcus Reno, the first soldier to actually launch an attack during the battle. The history is a bit fuzzy around Reno, and he may have been a bit fuzzy himself. Some accounts have him quite drunk by the time of the battle and therefore very much in need of being saved by Benteen. Whatever the case, subsequent military investigation of the battle concluded that Benteen fought bravely at Little Bighorn and would likely not have arrived in time to save Custer even if he hadn't stopped for Reno. Custer is more often blamed for the fact that he was cut off from his men, as he appeared to have rushed ahead against set strategy.


I had to make a judgement call. In the end, I saved hundreds of men. I did what I could, and I will live with the consequences.


Lieutenant Colonel George Custer (a General during the Civil War, demoted for various military offences) broke any number of promises in what history now judges as a pretty spotty and bloodthirsty career of military adventuring. At various times he was accused of abandoning men on the battlefield, disobeying orders in order to claim a greater share of victory and fame for himself, and massacring innocent women and children. Custer did not have to provoke a battle at the Little Bighorn. It was within his authority to enter Sitting Bull's camp peacefully and negotiate a settlement. He also did not have to split his forces the way he did. Speculation is that he did so to keep his competing officers behind him and out of the glory and spoils of victory. Custer led over 260 men to their deaths in the Greasy Grass, including two of his own brothers.

Custer's lame excuse for breaking his many promises:


I'm George Custer. I can do whatever I damn well please, and everyone better rush to help me when I get myself into trouble.

Custer's excuse is almost as low as "because I can," except in the end, he couldn't. Not that he didn't try.


The United States government, who sent George Custer and the 7th Calvary out to hunt for Sitting Bull's camp had previously broken a promise to keep European settlement out of the Black Hills. It was Custer himself who led the expedition into the sacred hills, searching for rumoured gold. He found it, and the rest is not particularly flattering history for white North Americans.

The US's lame excuse for breaking their promise:


Who today would seriously celebrate the ethics of either Custer or the US government in their treatment of the Sioux and the expropriation of their traditional property? And who today would blame either Sitting Bull or Captain Benteen for how they acted at Little Bighorn? Yet the Black Hills treaty dispute is still unsettled today, and it has taken almost 150 years to properly position everyone on the promise-breaking spectrum.

The abiding problem with freecult excuse-making:

Copyright is a social contract, a promise we all make to each other. I'll respect your work. You respect mine. We'll all eventually share. Willful infringement - and that's what illicit filesharing is - breaks the promise we have all made.

I can totally see some free culture academic making arguments about the good reasons for copyright infringement; how, like Sitting Bull, most users are not aware they've made an agreement, or they feel that because of high prices or DRM the promise is already broken.

But hold on there, partner. Take another look at the historically tested good reasons listed above. They all involve an acceptance of consequences - a key point missing from any of the lame excuses floated by the freecult.   In fact, freecult excuses mostly lean toward the no excuse at all end of the spectrum. Copyright is not infringed so often these days because of some monumental social shuift in how we view information (as theorists would have us believe); it's infringed because it is right now incredibly easy to infringe it, and for some folks that's all that matters.

The importance of scale when considering broken promises:

Sitting Bull and Benteen were also dealing with something more important than seeing the latest Hollywood blockbuster for free.

One was resisting the complete annihilation of his culture, the other was battling to save the lives of comrades in immediatet danger. The broken promise spectrum demands a sense of scale, I believe, and scale is woefully missing from most free cultural theory.

Are Greek youth socially and politically disaffected? Unquestionably. Do they have a steep economic climb ahead of them through no fault of their own? Yes, they do.

Is any of that a reason to illegally download a movie? 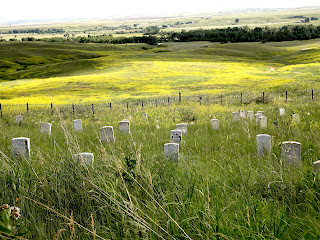 All images courtesy me. Custer and his soldiers are not actually buried under the gravemarkers in the last photo. Those stones mark where their bodies were found. Sitting Bull's vast encampment lay across the river, behind the dark band of trees in the distance.