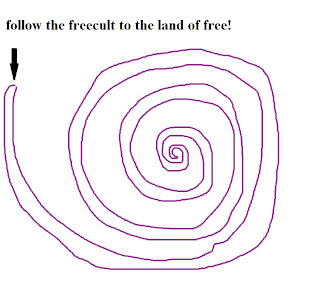 There's a classic freecult logical vortex for legitimizing piracy that goes like this:


People who pirate content aren't actually looking to steal; they really just want access. You content providers are either too slow or too stupid to provide access; therefore, you are inviting piracy. If you content providers would just get with the game and make your content easy to get and relatively cheap, people would buy instead of pirating, and you would be amazed at the amount of money you make.

I wish I could tell you that many astute and well-argued papers are being written by philosophy and ethics professors tearing apart the construct of such faulty and populist circular logic. Unfortunately, these days the academy seems preoccupied with inventing and/or spreading weak justifications for piracy, rather than putting them in their place. I wish I could tell you that Twitter, Facebook and the blogosphere regularly explode with outrage at such blatantly dogmatic victim-blaming. Sadly, despite now incontestable evidence that illicit filesharing is seriously damaging cultural creation, costing jobs and diverting millions upon millions of dollars from artists to criminals, much of the tech and social media remains in the thrall of free culture.

I point you to this article in Scientific American by NYTimes tech columnist David Pogue as just the latest example of the "inviting piracy" meme in popular culture. I became aware of this article because it was retweeted by the prominent freecult academic, Michael Geist, a law professor by trade - and I'm pretty sure he wasn't retweeting it to his students as a lesson in logical  (or legal) fallacy.

Now, there's a fun new freecult logical vortex that goes like this:

What do you content providers expect people to do other than steal your content? I mean, you idiots make valuable content and then you just leave it lying around with lame-ass paywalls and inadequate password protection to keep it safe. Don't you realize that's just asking for pirates to come along and take your content? Worse yet, then you actually expect the law to protect your work from theft? Don't you know legal solutions to piracy just infringe everyone else's rights to privacy and free expression?

For a recent example of this line of reasoning, I point you to this hilarious satire on the Techdirt blog, contrasting the responses to theft by a super-reasonable hipster and a soulless Hollywood association. The Motion Picture Association of America (MPAA) stupidly demands the law do something about the online piracy that attacks its property daily, while the smart, reasonable hipster just makes sure his property is out of sight of the thieves. Isn't the MPAA stupid? And isn't it funny how stupid they are?

True, it would appear that with this article Techdirt and the rest of the piracy-excusing mob have finally admitted that online piracy is a form of theft, but I suppose that's a reasonable concession on their part considering the theft is entirely Hollywood's fault (says David Pogue) and, really, aren't all content providers just morons to expect the law to do anything about it?

So here's where we are:

If you, the professional content creator, are stupid enough to actually create valuable content and even think about putting it near the Internet, you are inviting piracy. And if you think technological protection measures (TPMs) will protect the value of your valuable content, you're even more stupid. If you think the law should address your problem, you're some kind of freedom-hating corporate monster. Also, stupid.

On the other hand, if you don't allow people access to your content on the Internet, you're also just inviting piracy. You should totally put that content up there, and make it as easy and cheap as possible for people to access it, and they will totally not steal it.

Except they will steal it because you were stupid enough to leave it there, all valuable and stuff. C'mon stupid, how come you can't adapt your business model to the times?


Thanks, freecult, for legitimizing and excusing some of society's lamest behaviours. Next, can you explain the connection between sexual harassment and how people dress?