is copy culture destroying the core values of our education system?

I have many friends (and family members) who work in the academy, and I'm aware how painful and oversimplified conversations around "what's wrong with our education system, anyway?" can be, especially when it looks like there's a call to take sides and lay blame. It's not my intention to minimize the complexity of the issues that bring us to where we are today. That said, I can't ignore my own personal experience over the last 15 years or so in dealing with an education sector that, in my opinion, is drifting further and further from its mission and values.

On this blog, I've been highly critical of free-culture theory and the copy culture that has arisen with the digital age. My animosity to these trends flows quite naturally from my love of, and vested interest in, writing and publishing as a profession. I don't think I've ever hidden that bias. Nevertheless, I think some prominent segments of the education sector have a lot to answer for around the free culture attack on copyright.

Just today I was reading an academic blog that suggested anthology publishing might soon die, "made unprofitable by recent changes to Canadian copyright law and the increasing competition of coursepacks." Never before have I seen an academic so openly characterize photocopied or scanned coursepack production as "competition" for traditional publishing. That the academic in question is also a professional writer explains the recognition. It needs to be pointed out such "competition" is on a seriously tilted playing field. Traditional publishing actually pays its writers for their work, whereas recent overbroad interpretations of copyright changes in Canada are looking to gift coursepack compilers with as much free content as they can stuff between their bindings.

Similarly, I was recently directed to an online issue of Education Forum, the house organ of the Ontario Secondary School Teacher's Federation. All in one issue, we see a celebration of the Ontario Teacher's Pension Plan, which has "the highest investment return among 328 pension funds in the world" - look how rich we are! - an analysis of how student tuition fees in Ontario have tripled in the last 23 years, threatening to make post-secondary education the exclusive realm of the privileged - look how rich we expect students to be! -  and a triumphal celebration of recent changes to copyright law in Canada that instructs teachers how much professionally produced writing they can copy without payment or permission - look how much stuff we get for free!

The fair dealing article in Education Forum includes a dramatic warning to teachers that the writing and publishing sector may sue them "in the hopes of recouping the perceived losses." How can you dismiss as "perceived"  a loss you've just yourself described in gleeful detail? You can't make this stuff up, folks.

I'm not suggesting copy- and free-culture theory is either the beginning or the end of a disturbing mission drift in education. I do, however, think it plays a role.

Recently, the CBC has taken a long hard look at the issue of academic honesty at Canadian universities. In reports on the CBC.ca website, it was revealed that over 7,000 university students across Canada were disciplined for some form of cheating, from outright plagiarism (which made up over half the offenses), to buying ready-made academic papers, to looking at cheat notes during exams.

7,000 is a huge number, of course. But worse than this revelation is the suggestion by CBC researchers that this number is eclipsed by the number of students who were not caught and therefore not punished for academic dishonesty. While data supplied by participating universities showed about 1% of students actually punished for cheating, a separate survey of Canadian students revealed a whopping 50% willing to admit off the record that they have engaged in some form of cheating at school. Depressingly, CBC quotes an anonymous student with designs on law school and a career in Canadian law:


“I'd challenge anyone who can say that they haven't broken the law... So for me to have cheated on an exam to get ahead in life, I think it's wrong, but I don't think it's the worst thing that could be done.”

Depressing, yes, but hardly surprising to anyone who's been watching recent developments in Canadian higher education.

As I've tried to point out many times on this blog, I believe the Canadian academy is infected by a virulent strain of copy culture that at best provides cover for such academic line-crossing - by studiously ignoring and/or blurring important lines. At worst, the theoretical expansion of copy culture is, in my opinion, tacit approval for the kind of logic that convinces a future law student that breaking the law is not "the worst thing that could be done."

Portrait of an academic culture from one man's perspective 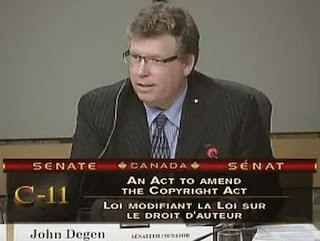 On June 26, 2012, as ill-conceived changes to Canada's Copyright Act rolled inevitably toward approval in Parliament, I sat in a committee room in front of Canada's Senate and respectfully asked for sober second thought and consideration for what I saw as very real economic damage to Canada's cultural sector as a result of new educational exceptions added to the Act. At the time, I was employed by the Ontario Arts Council, but as I made clear in my testimony I was there representing myself as a professional writer.

Seated beside me was legal counsel for the Council of Ministers of Education of Canada (CMEC), an intergovernmental group advocating broad new educational freedoms under copyright. When asked by a concerned Senator about suggestions of economic damage to Canada's cultural sector, with specific reference to collective licensing, CMEC's legal counsel said this:


"There's been a great deal of, um - and I don't want to use a pejorative word - rhetoric and numbers thrown around about losses that are going to result from [this change to the Copyright Act]. None of those numbers have any empirical basis. The claims are very easy to make, and in my view and in the view of my clients, the Ministers of Education, are unfounded. For example, the reference to the fact that universities and colleges have withdrawn from the Access Copyright system because of Bill C-11 is patently false."

This is a quote from testimony on the public record that can be accessed, by anyone, at this video link. It comes at about the 1 hour 34 minute mark. In an earlier remark, the same witness suggested that provincial education acquisition budgets "will not change." I'm not sure how anyone could comfortably make such a prediction, but okay.

Has there been empirical damage to the cultural economy in Canada since the passage of C-11?

Of course there has. Access Copyright has taken expensive legal action because, unless it defends its licensing territory, Canada's writers and publishers will continue to lose tens of millions of dollars of license royalties every year universities, colleges and K-12 schools continue to claim they do not have to pay collective license royalties for the massive, industrial scale copying that takes place in the name of education. These are the same "perceived losses" referenced in the Education Forum article above.

I hear from professional writers every single day, and they are telling me that their royalty cheques are decreasing precipitously, sometimes disappearing altogether. What else can anyone call this situation but economic damage? Writers are "perceiving" these losses because these losses are coming from their personal budgets.

Have provincial educational acquisition budgets changed? Not sure because it's hard to tease out acquisitions from the overall budgets, but between 2012 and 2013, immediately following the passage of C-11, Nova Scotia's overall education budget looks to have seen a $13 million dollar reduction in expenses. I chose Nova Scotia because that province's Education Minister, Ramona Jennex, was referenced several times before the Senate.

What is Access Copyright's licensing territory? Well, it looks an awful lot like the territory now claimed by a large number of Canadian universities, such as the University of British Columbia (in their Fair Dealing Requirements for UBC Faculty and Staff), specifically the collective license requires payment for the copying of up to 10% of a work for inclusion in a course pack, a use now claimed by schools under their interpretation of fair dealing. To be clear, UBC references new provisions in the Copyright Act provided by C-11 as a factor in their decision to expand how much they claim.

The huge Association of American Publishers came out this month with serious warnings about Canada's copyright climate:

Under the now-pervasive misconception that all copying for educational use is now permitted without rights-holder permission or compensation, Canadian schools have defected en masse from longstanding licenses through Access Copyright, the country’s not-for-profit content licensing service provider. This misconception has also stymied nascent efforts by Access Copyright and its affiliated creators and publishers to develop a robust licensing service for digital educational materials to better serve the country’s students. Publishers are already seeing contraction of direct sales of educational materials in Canada, despite its role as a long-established, well-functioning licensing market for the US.


Okay, I've stated a bunch of facts, verifiable on an "empirical basis." You decide for yourself what these facts suggest about the current state of education in our country.