the real numbers of fair dealing

Hey folks, this blog posting is brought to you in part by Grammarly.com. I use Grammarly's plagiarism checker because finding out I'm not as clever as I think I am centers me as a person. Deep breath.

Let's Go to the Numbers

I spend a lot of time thinking about, and talking about, the value of books and writing. My last posting here was all about the dollar value numbers around e-book pricing, especially around the thorny issue of institutional pricing for libraries and schools who, we must admit, use books differently than the average consumer.

You know who else uses books? Students and teachers - and the schools they work for and attend. Recently, you may have heard, there has been a bit of a disagreement in Canada between writers and some schools, over just what needs to be paid for and what does not. The issue was drawn into focus when the University of British Columbia published a statement proudly claiming substantial cost reductions (33%) on photocopied course packs in large part because of a "reliance on fair dealing" and the avoidance of "onerous blanket licensing."

The Chair of the Writers' Union of Canada (for whom I happily toil*) sent a letter to UBC expressing dismay that an institute of higher learning would take pride in not paying for copyright licenses that continue to be required by law in Canada. The definition of fair dealing UBC believes excuses them from collective licensing has no basis in Canadian law (in my opinion), and is strongly opposed by Canadian writers.

UBC's President responded with a letter defending his school's record on educational materials spending. He wrote:

UBC pays in the neighbourhood of $25 million to publishers and authors every year. In fiscal 2011/12, UBC spent approximately $2 million on book acquisitions, $2 million on print serials, and $10 million on digitally licensed subscriptions for students and faculty to access through its library system. UBC also sold approximately $14 million of books directly to students and faculty (for which UBC paid publishers about $10 million**). In the same period, total course pack sales were about $1 million, less than 4% of the total spent on learning materials.

So, what's the argument here? UBC spends a bunch on print materials and digital subscriptions, so we figure we'll just take the rest of your materials for free?

Break Out the Excel Spreadsheets

According to the actual numbers quoted in the UBC letter, the "neighbourhood" of $25 million is $24 million. I don't know what neighbourhood UBC is in, but according to the average earnings of Canadian writers ($15,000 per annum), 67 writers live within the difference between those neighbourhoods. Furthermore, while UBC seems justifiably proud of spending $2 million on books in a year, they dismiss $1 million in course pack sales as somehow inconsequential.

To be absolutely clear, that's $1 million in physically photocopied course packs we're talking about. UBC does not actually mention how many digital course packs it puts together using the same materials it used to use in the photocopied variety.

Now, UBC's budget is something to behold. In 2012, the school's revenues exceeded $2 billion (with a b), and in that same year they increased their accumulated surplus by $37.8 million to a total of ... let's say in the neighbourhood of $1.5 billion. 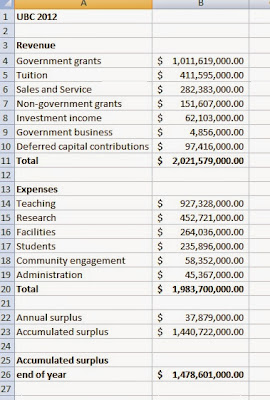 But wait, what exactly is that funny $10 million UBC claims it pays to publishers every year?

UBC also sold approximately $14 million of books directly to students and faculty (for which UBC paid publishers about $10 million).

This refers to the sale of physical books to students through campus bookstores. The $10 million UBC claims to "pay" publishers is, in fact, the actual price of these books minus a 40% discount on the retail price they collect for themselves. UBC is not paying this $10 million to publishers, their students are, straight out of their own pockets, because UBC tells them they have to. The claim that UBC is paying this money is fanciful at best. To keep things clear, let's remove that $10 million from the discussion. That leaves UBC with an annual spend on materials of $14 million.

What does $14 million look like in an expense budget of close to $2 billion? It looks like this: 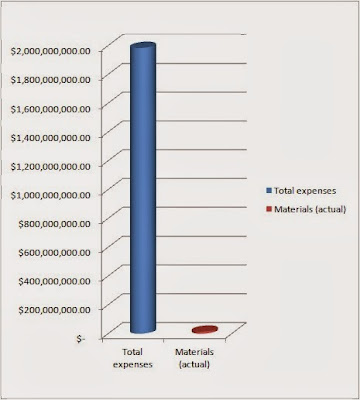 Note that students paid $411.5 million in tuition to UBC in 2012, and received $235.8 in dedicated spending in return. What does a $14 million spend in relation to that income look like? Like this: 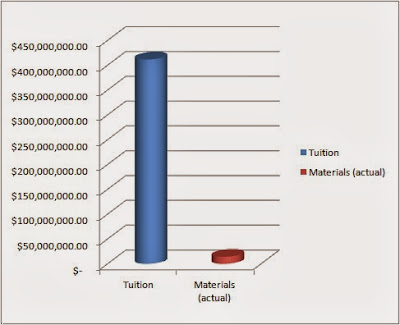 According to its own numbers, UBC spends 3% of what it earns in tuition from students on published learning materials for those students, while the students themselves collectively spend an extra $10 million on books not covered in UBC's materials spend.

Remember that measly $1 million in total course pack sales UBC mentioned? As we know, UBC now claims to have saved 33% of that through its reliance on fair dealing and the avoidance of collective licensing. My calculator puts that savings at $330,000.

$330,000 (which I believe rightfully belongs to Canada's writers and publishers for the excellent work they have done) represents 2% of the $14 million UBC actually spends on learning materials, and is - wait for it... 0.01% of UBC total expenses.

A 0.01% cost reduction at the expense of the great good will of Canada's cultural creators and producers.

Something to be proud of indeed.  ﻿

At the risk of being criticized as an elite, the one-sidedness of this argument is troubling. Aside from the bookstore and the coursepacks, the university library is responsible for the lion's share of that book budget, and this argument is dismissive of that relationship, despite the amount that (academic) libraries DO put toward to the publishing bottom line.

That aside, as an academic librarian I've nothing good to say about coursepacks, as they are essentially a system of paying twice for materials that the library has already paid for, often via licences which restrict use above and beyond the requirements of Canadian law. These licences come via massive aggregators and publishers like Nature Publishing Group and Elsevier, who posted a profit of over 1B pounds in 2012. These publishers DO NOT PAY THEIR AUTHORS ANYTHING (they let the universities do that) but charge libraries increases of upwards of 100% on renewal (keep in mind this is generally to access, not own, the content). Because of these pricing models, libraries are transferring out of their monograph budgets to cover serials costs. I find the outrage over $330,000 in this article ironic considering the $1B in profits that a single publishing conglomerate walked away with last year.

I mention this because generalizations about publishers are as misleading as generalizations about "academic elites." As we well know, many university instructors are sessionals paid pennies. Those individuals are often writers. I've received photocopies from those writer-instructors in classes. Those photocopies have introduced me to poems I have fallen in love with, and gone on to purchase books by their authors.

John, my question is, why attack libraries? We are your partners in a common cause: spreading information. We pay for the books and journals we use. We create interest and further the acts of reading and research. Surely there is a way to better the righteous causes of Canadian authors (and I am not using sarcasm here) without scrapping their relationships with university libraries in the process.

I agree the payment model for much academic publishing, especially in journals is fraught with all sorts of problems - low or no pay up front, low or no royalties. Personally, I think academics should retain their copyright as a matter of principle whenever and wherever possible, and I believe that act alone would go a long way to solving some of the other concerns you allude to in reference to subscription prices and terms and usage restrictions.

By handing over copyright to the educational publishing consortia, academics are also handing over the right to decide the terms of use for their work.

I do see great value in course packs because even if a library has purchased the work from which course pack copies are made, a very limited number of students can access that work at any given time. Coursepacks (under proper licence arrangements) allow for legal copying to increase that accessibility. But the licence payments are crucial to make that arrangement fair for everyone. Otherwise a school could have their library purchase a single copy of a work and make endless perfect digital copies of large chunks of it for the use of endless students.

There's nothing economically realistic or sustainable about such a scenario, and certainly no fairness.