As my previous post noted, I spent yesterday in Ottawa, talking with Canadian Senators about Bill C-11, the Act to Amend the Copyright Act. My testimony is archived online here, and you can read my initial statement in the previous posting. 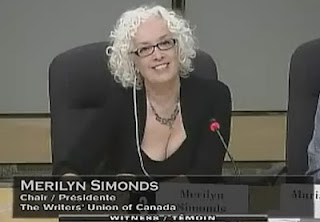 Also on the slate yesterday were Roanie Levy, General Counsel and Director of Policy and External Affairs for Access Copyright, and Merilyn Simonds, Chair of the Writers' Union of Canada (accompanied by legal counsel Marian Hebb). 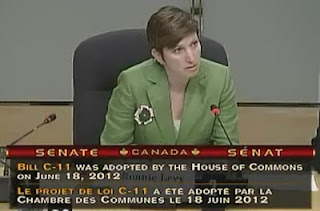 Levy and Simonds' testimony is essential viewing for anyone unclear about just what writers and publishers are fighting for in the current educational copyright negotiations. Their presentations start at the 2hr 10m 50sec mark of this video, and I recommend watching the whole thing as there's some fascinating stuff in there from the Senators around the committee table as well.

Particularly interesting are preface remarks from both Senator Nancy Ruth and Senator Wilfred Moore, who noted, for the record, that they had each just received e-mails or text messages from university presidents in Canada asking if C-11 had passed yet.

It's funny - yesterday during my testimony, I was seated next to legal counsel for the consortium of Ministers of Education (who are pushing an educational exception to copyright), and she assured the committee that no university is intending to opt-out of collective licensing on passage of this bill. They are, apparently, simply not waiting for C-11 in that way.

In my response to this assertion, I wondered why all the opting out universities mentioned in their press releases the imminent passage of C-11 as the reason for not signing new licenses. As you will see in the video link above, Roanie Levy of Access Copyright went even further in her presentation, quoting directly from letters and press releases from schools, showing that they were absolutely depending on C-11 to exempt them from licensing requirements.

So, while we writers and our collective sat in the Senate yesterday pleading our case, university presidents were desperately texting Senators to find out just when they can stop worrying about those pesky copyright licenses.

Side note on just how sleazy the freecult can be:

Today, the usual suspects in Canada's freecult - the organized lobby effort opposed to collective licence compensation for Canada's artists - are crowing about an obscure article by a Canadian writer complaining about Access Copyright. Of course, the concerns this writer brings up in his attack on the collective are old, have been dealt with ad nauseam and have actually been proven groundless by independent investigators... but who cares about the pesky facts? Someone's saying something bad about a copyright collective! Let's jump on it.

So, folks who yesterday had never even heard of Brian Brett are now calling him a"leading" writer, as though they've ever read a single word he's written outside his recent op ed.

I like Brian Brett, a lot. He was the Chair of The Writers Union of Canada in 2005-06, and he's an excellent writer. He's also completely off the mark in his criticism of Access Copyright - wrong as wrong can be, and I've told him so to his face at a Writers' Union AGM. Anyone who has ever attended a TWUC or Access Copyright AGM (or any AGM for that matter) knows that there is never universal agreement... about anything... in any organization. In an organization responsible for distributing tens of millions of dollars to thousands of members, you can imagine that emotions can run high, and folks can go off half-cocked and full of incorrect information.

To put things in perspective, Brian Brett opens his attack by saying he would not be signing this letter to Canadian universities, supporting Access Copyright.

75 other prominent Canadian writers DID sign it, and ten organizations representing thousands of other Canadian creators signed it as well. Among the signatories are 14 other past Chairs of the Writers Union and the current Chair who sat beside the AC Counsel in the Senate yesterday, agreeing with and supporting everything Ms. Levy had to say about her organization.

If the freecult digs around, will they find someone in the creator camp who doesn't understand the stakes of this fight for creators? Sure.

Does that mean creators are not in agreement? It does not. All it means is that the freecult will sink to any depths to steal from creators.

Frankly, they can stop trying to prove that fact. We get it.

I think the two issues are separate, and the use of Brett's op-ed by the free culture folks shows they have no real on-the-ground understanding of how writers work with each other - nor do they care to learn. They simply generalize all disagreement as meaning collective licensing is bad.