education on fire - and copyright has nothing to do with it 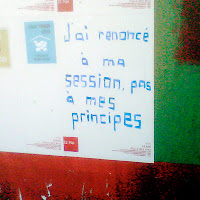 I spent the May long weekend in Montreal with some old friends. This was a reprise of an old roadtrip we used to regularly make before the days of mortgages, children, and all the things that naturally deter an adult from making an unnecessary journey with no particular itinerary attached. It was to be a welcome and soul-reviving event, and we chattered away about it in anticipation over the e-lines for weeks in advance.

We arrived early on Friday evening to a city that, by all appearances, was preparing itself for a languid, early summer. Cafe owners painted and repaired their patios, the frisbees and bongo drums were already out, and American tourists were popping up like spring crocuses everywhere downtown.  We checked into our budget hotel in the Quartier Latin, opened wide the french doors to the tiny wrought iron balcony, removed various caps from various bottles, and settled in for a relaxed cocktail hour prior to dinner. Not long afterwards, we heard the first shouted orders through a bullhorn and the sound of an approaching helicopter.

A quick check out on the balcony showed us that we had unwittingly planted ourselves smack in the middle of the civil disobedience epicentre of Quebec's printemps de feu. Less than a block away, St. Catherine's street was cordoned off by police in riot gear, and a screaming river of student protesters flowed past them, some masked in eerie Guy Fawkes faces, some shirtless, at least one in a panda suit, all angry(ish) about tuition increases. The rest of the evening produced a steady tempo of clash and lull, clash and lull, as the authorities tried to keep ahead of the roaming crowds (estimated at more than 10,000 people), and as leaders of the more radical student groups ramped up the violence. By the end of the night, we were keeping a close eye on the streets below, making sure none of the fireworks or molotov cocktails hit our hotel. Walking the district the next morning in search of coffee, I lost count of the spent rockets and broken bottles littering the pavement.

Saturday was a perfect day in Montreal. We spent much of it under the trees in Parc la fontaine, eating local market food and watching students paint themselves in preparation for the evening. The Quebec government had passed an emergency law making it illegal to protest in disguise and requiring prior permission for gatherings of more than 50 people. Good luck with that. Rather predictably, Saturday ended much like Friday, though the violence was even more concentrated in our neighbourhood with the perpetual racket of rotary blades overhead and the stench of burning rubber from the barricade bonfire at St. Denis and Ontario streets.


The comment sections after all those articles will give you an idea of the spectrum of opinion about these protests/riots. I saw a lot of well-meaning kids on the streets flexing their freedom of expression, and I also saw a lot of idiots trashing everyone else's. It was pretty easy to make the distinction - the idiots were starting fires and taunting police. Strangely, I did not see members of the band Arcade Fire, or Mick Jagger, or Michael Moore on the streets, though each of those celebrity endorsers seemed to think it was just great that a lot of ordinary folks in Montreal were in physical danger over the weekend. Thanks, distant and extremely comfortable celebrities. I hope your limos had a smooth ride to the airport in New York.

Quebec tuition is roughly half what students in other parts of Canada pay. The proposed tuition increase would not even come near to closing that gap.

The emergency legislation introduced by Quebec Premier Jean Charest, Bill 78, which restricts protest size and makes disguised protest illegal clearly inflamed an already volatile situation, though from what I saw there was enough anger before that bill to burn down a city.

And, very importantly, in a weekend of fiery rhetoric, flying glass, explosions, shouted slogans, and democratic demands painted and plastered on walls and hoardings, I never heard or saw a single mention of copyright royalties to artists being a financial burden to students.


Why do I mention that last point? Because the free culture movement in Canada, headquartered in spacious professorial offices on Canadian university campuses, would have us all believe that students are ready to take the streets to protest the fair collective licensing for educational materials - a cost that currently stands at $26 per year. 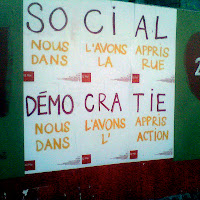 With most students across the country on the hook for close to $5,000 per year in tuition, and with riots in the streets of Montreal over less than half that amount in tuition, it seems pretty clear what is getting students riled up these days, and it's not the tiny amount they might have to pay for copyright. Despite it being national news for over a month now, I can't help noticing there hasn't been a single mention of the Quebec tuition protests from Canada's most prominent free culturists, not even when they're proclaiming about the future of education.