NatPo's editorial on copyright is... well... a copy 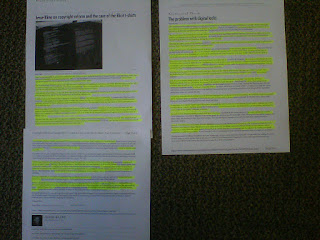 On Thursday October 27th, Canada's National Post newspaper published a masthead editorial expressing some commonly held (though inaccurate) free culture complaints against Canada's Copyright Modernization Bill C-11. That a print-based newspaper would choose to launch an attack against "established old-media players" in the cultural economy is a bit baffling in itself, but what struck me as most odd about this editorial was just how familiar it all sounded.

Hadn't I read this somewhere else... just recently?

Well, no, I hadn't read it somewhere else; I'd read it in the National Post... on Wednesday, October 26th.

On Wednesday, the Post published an op-ed from one of its staffers, Jesse Kline, entitled "Jesse Kline on copyright reform and the case of the illicit t-shirts." The very next day, Kline's article was reprinted almost word for word as an original masthead editorial in the same paper.

See the image above for my quick, highlighter-aided comparison study of the two articles. There are no less that 24 sentences that are wholly or partially in common between the two "original" pieces.

I also note that Canada's most vocal free culture cheerleader, Dr. Michael Geist, happily posted links to both articles on his blog, apparently missing the fact that he too was repeating himself.

Where does lazy free culture thinking and a disrespect for originality take culture? See for yourself.

No wait. What I meant to say was... Where does lazy free culture thinking and a disrespect for originality take culture? See for yourself.

P.S. I sincerely hope Mr. Kline was paid twice for his work this week. Otherwise, he has a pretty strong case for a plagiarism claim.

Maybe Mr. Kline actually wrote both articles, in which case, was the National Post aware he was just going to phone in the second one?

If it weren't so sad, it would be funny.

Could you list the inaccuracies in the article? You'd know why more than I.

Final warning - use a name if you want an answer. Preferably a real name. I have no patience for bad-faith comments anymore.

Whoops. Forgot your request for a name (I only did anonymous because it's quickest and not to annoy--can you turn it off?)
Anyway, I only requested the details of the stated inaccuracies because, well, I like the details for a person's arguments. You didn't put them down and since you're more up on the topic than myself I requested you list them. Nothing more, nothing less.

Thanks for respecting my name request. After years of dealing with free culture spam, one reaches a point of no return with one's patience.

Where to start on inaccuracies?

Well, first of all, C-11 does not even mention "digital locks" let alone place a "blanket ban on breaking" them as the Post claims in their editorial (in the same words Kline used earlier). As IP lawyer James Gannon has recently pointed out, "nowhere in the government’s proposed copyright reform bill, Bill C-11, are the words “digital lock” actually used."

Secondly, if we're talking about TPMs and DRM, C-11 does not impose a blanket ban on breaking those either. It imposes a carefully crafted, nuanced prohibition with a number of important exceptions. Again I'll quote from Mr. James "TPM" Gannon:

Bill C-32 contains 8 exceptions that allow circumventing a TPM for a certain purpose:

•Prescribe that a certain class of TPMs will not be protected under these provisions (s.41.21(1))
•Prescribe a new exception to allow circumvention for a particular purpose (s.41.21(2)(a))
•Require a copyright owner who limits access to a work through TPMs to allow access (s.41.21(2)(b))
Few other countries, including the US, have included such wide-ranging abilities for amendment through regulation in their TPM-protection laws.

"Purchasing an e-book on an e-reader that contains a digital lock means that a user cannot necessarily read it on a computer or on a different company's e-reader."

I buy TPMed e-books all the time, and I read them on a variety of platforms, including computers and a different company's e-reader. This quote shows the Post's (and much of free culture's) complete ignorance of real-world TPM usage. It is an example of speculating that the law will go to the same absurd lengths as do the imaginations of free culture advocates, which is never the case (how could it be?).

So, yeah, a fundamentally inaccurate and unoriginal editorial.