what me, a gadget? 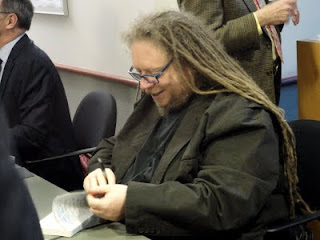 Last Thursday, I had the very great pleasure of attending a talk by tech theorists Jaron Lanier and Tim Wu at the Rotman School of Management at the University of Toronto (my alma mater). A couple of pretty smart dudes, Wu and Lanier.

Wu, a Columbia professor, Internet-regulation employee of Barack Obama, and coiner of the term "net-neutrality" has written The Master Switch, which I've just now begun reading -- a narrative history of communications monopolies and oligopolies, that is refreshingly agnostic (at least at the beginning) about the big players in today's communications revolution. I understand Wu grew up (in Toronto) as a classmate and Dungeons and Dragons opponent of prominent copyfighter Cory Doctorow, but I'm choosing to not hold that against him since, in his talk last week, he showed a far greater subtlety of thought than I've ever witnessed from his childhood friend.

Lanier's book, You Are Not a Gadget, is already part of my digital-age favorites library. The fantastically freaky Lanier is a Silicon Valley original, the inventor of virtual reality technology and a friend/gadfly to the biggest of the tech players of today. He's on a first name basis with Sergey and Larry at Google, but these days he probably isn't invited to all of the Singularity Now! parties in northern California because his book is a scorching indictment of some of the lazy philosophizing that threatens to ruin cultural production in the name of consumer "freedom."

The event was too short by half. I think I'd enjoy challenging Mr. Wu on some of his thinking about the future of the Internet, but with Lanier I'd love to just sit and listen. One of the standard criticisms of copyright defenders these days is that we "just don't understand the technology." Well, Lanier invented the damn technology, so good luck tagging him with that one.

One effect of the so-called free way of thinking is that it could eventually force anyone who wants to survive on the basis of mental activity (other than cloud tending) to enter into some sort of legal or political fortress - or become a pet of a wealthy patron - in order to be protected from the rapacious hive mind. What free really means is that artists, musicians, writers and filmmakers will have to cloak themselves within stodgy institutions.

We forget what a wonder, what a breath of fresh air it has been to have creative people make their way in the world of commerce instead of patronage. Patrons gave us Bach and Michelangelo, but it's unlikely patrons would have given us Nabokov, the Beatles, or Stanley Kubrick.

Sounds like a cool guy John. But with tonights win, we may never know what an open competitive digital environment in Canada could have brought.

With a Conservative Majority win I suggest looking at the following investment opportunities...

I'm not sure your comment fits well with the spirit of cooperation and understanding you so often espouse.

As a public servant, I try to stay publicly apolitical. As an artist, I work cooperatively with the entire Parliament to inform, encourage and support legislation that is culturally invigorating.

I don't think partisan name-calling or cynical predictions of corruption will help any of us... but I do understand these things are encouraged over at that other blog you frequent.

John, I am going to have to agree with you. I don't think I inferred anything on corruption but rather pointed out where past policies have led, but the results are now in and we will have to work within them.

I am going to put my optimist hat back on and give the CPC a chance to listen to the needs of Canadians over the pressures of outside influences. I am cautious though as now that they have their majority, there will be a lot of players, hat in hand, coming to finally collect their dues.

If they want to be more than a one term majority though then they will need to govern a little more to the middle. Otherwise they will galvanize the left to merge and then they are out.

A barometer for me will be how they handle UBB, before the election they rode the popular protest wave and dialed it back. Now that they are locked in for four years will they revert to their old ways?

Excuse me sir ... did you drop your hat?

I have no idea what you are trying to suggest with that link. Does the 301 watch list story have anything to do with jaron Lanier or my appreciation for him?

It's hardly a secret our #1 trading partner would like to see us pass copyright reform legislation to better protect intellectual property.

@John "Does the 301 watch list story have anything to do with jaron Lanier or my appreciation for him?"

Well, about as much as Bin Laden has with the Canadian election ...

Clearly you understood exactly what I meant on Geist's blog or you wouldn't have laughed.

I still have no idea what you mean by linking Lanier with the 301 list. Just try to bring your criticisms in for a landing, please.

@Degen "Clearly you understood exactly what I meant on Geist's blog or you wouldn't have laughed."

"You Are Not a Gadget" is a must-read if you want to truly understand what is at stake for those who want to make a living by their creative expression in the digital world.

Have you read it?

I'll take your challenge Sandy. I read the first chapter of his book via an online preview, quite a thinker. I'll download the kindle edition and get back to you with my thoughts on his Manifesto.

Great. Love to hear what you think of "Gadjet"