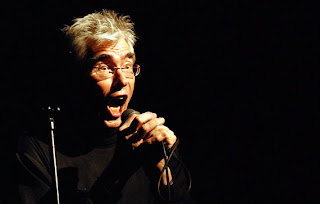 Oh, I'm angry with my calendar right now. If I could be in Ottawa next week for the AB Series special night at the National Arts Centre then that's exactly where I would be. I can't; I won't, and five straight days of rain couldn't make me feel worse about the situation.

The AB Series is Ottawa's reading series for performance, sound and experimental poetry. Organized and hosted by Ottawa sound poet Max Middle, AB has incredible reach into the sometimes mysterious international scene for truly avant garde poetics. Next Wednesday, they are presenting a fourth stage performance at the NAC by Dutch musician and sound performer Jaap Blonk. Blonk will perform his latest work, a live version of Antonin Artaud's To Have Done With the Judgement of God (translated by Clayton Eshleman). This performance of Artaud was originally commissioned by BBC Radio and premiered in London late last year. Blonk’s creates variations on Artaud's sound poetry in a unique, original homage.

The opening act for the evening features a group of talented Ottawa poets and performers (Christine McNair, Sean Moreland, Glenn Nuotio, Carmel Purkis, Sandra Ridley and Grant Wilkins) in a collective/joint performance, which has them reading, reconfiguring and responding to artist Michèle Provost’s exhibition, playlist

For those unfamiliar with sound or performance poetry, here's a great introduction. Jaap Blonk performing some of the ursonate by Kurt Schwitters. I've seen Canadian poet Christian Bök perform Schwitters' work on many occasions, and he's excellent in his own right, but there's something about the combination of Schwitters' germanic nonsense sonate and Blonk's Dutch accent that is too compelling - softer and more playful than Bök's full-on attack.

If you're in or around Ottawa next week, may I make a recommendation?

Disclosure: The AB Series received funding in 2010/11 through the Ontario Arts Council's Literary Festivals and Organizations program, which I administer in the OAC's literature office. Funding in the program is recommended by a five-person advisory committee.
Posted by John at 9:49 AM