Thursday, the special C-32 Committee charged with seeking balance in the Copyright Modernization Act was itself questioned about a perceived lack of balance. Before the first witness of the day spoke, MP Carole Lavallée complained to the Chair, Gordon Brown, about a distinctly unbalanced presentation schedule.

The Canadian Civil Liberties Association, represented by Nathalie Des Rosiers and Howard P. Knopf, both of whom had previously testified before the committee were given the full first hour of the schedule to present similar testimony to what they had already brought.

Given the presence of Knopf, an outspoken educational fair-dealing advocate and critic of collective societies, it is accurate to say the first hour was given to a single and previously heard user-perspective group, while the remainder of the committee's time was divided between three separate creator-perspective groups, each with their own unique concerns and each being given their one and only opportunity to speak to the committee.

Ms. Lavallée's concerns have merit, I think. In the very same early exchange, Gordon Brown noted that close to 170 witnesses remain on the schedule and that it is unlikely the committee will get a chance to see them all. Given that fact, it seems a strange waste of the committee's time to see the same witnesses with the same testimony twice.

I appreciate that the Clerk of the Committee has a very difficult job in this instance, but I think it behooves all members (and staff) to be more aware of perspective-balance. The clerk's explanation that the CCLA's submission would be more broad than that of the three creator groups, could be interpreted as prejudgment of testimony not yet heard by the committee. I am, in general, very pleased with the attention the C-32 committee is giving to its complicated subject-matter, and I would not want any perception of prejudgment to creep in and poison the well for either creators or users.

To be clear, I don't think this was the case on Thursday. I think what happened was an honest misstep - but a disturbing misstep nevertheless. Howard Knopf has now been given two opportunities to present his extremely one-sided opinions of collective societies in front of the committee. On the see-saw of copyright testimony, he is sort of like the bully who pushes someone out of line so he can have a second crack at knocking off the kid in the opposing seat. Not exactly good schoolyard behaviour; but then, we've come to expect that from the more vocal free culture advocates in this debate.

On a much more positive note, the Professional Writers Association of Canada (PWAC) presented, in my very biased opinion, some of the most clear, levelheaded and culturally intelligent testimony the committee has seen. In the spirit of full disclosure, let me inform those who don't already know that I was Executive Director of PWAC for five years of the last decade. 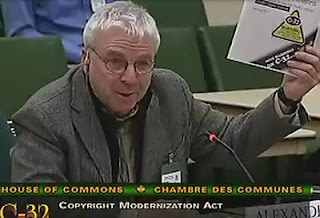 Above, you see Alexander (Sandy) Crawley, Executive Director of the Professional Writers Association of Canada presenting PWAC's testimony in front of the C-32 Committee on Thursday afternoon. Video of his full testimony can be still seen on the committee website.

He covered a lot of ground, but returned again and again to a very plainspoken declaration that stands, I think, for all professional creators in Canada. Professional writers are already discovering and inventing new business models to help lead Canada's knowledge economy. Contrary to what the most outspoken free-culturists say about us, we are not living in the past, trying to return everyone to dead technologies and business arrangements. Instead we intend to be the leaders in all of this, but we can't very well lead if ill-conceived copyright reforms cut our hamstrings.

I think Crawley's finest moment came under questioning from NDP copyright critic Charlie Angus. Angus, a musician and former small magazine publisher seemed to be trying to draw Crawley into his own ideological attack on "big" corporate media. This is not a foreign ideology to freelance writers or most professional creators, but neither is it particularly helpful to professional creators in this discussion, and Crawley refused to bite the hook.

Many writers and artists are willing business partners with corporate media clients. Big media is a large and very important market for the cultural economy. And besides, in copyright it's not just big media who are rightsholders. We are all rightsholders. Weaken the rightsholder side and you just make it that much easier for free culture bullies to knock us all off the seesaw.

I take it, then, that Knopf’s opinions are “one-sided” while your opinions, which disagree with his, are balanced.

I further take it that if creators are all rightsholders then something they aren’t is users (in the sense used in n CCH).

Which part did I get wrong?

Also, who precisely has been “bull[ying]” you in your government-sector job or your clearly unfettered role as a copyright lobbyist?

Since you asked -- you got both parts wrong. I don't hide my bias in the copyright debate. I'm very open about it.

I'm a professional creator and user of copyright-protected content. I believe the law exists to address those concerns first. If you read the full post, you will notice that I even say my opinions are biased in this way.

My concern about Knopf is that he has added nothing new to the hearings with his repeated testimony. That's a waste of everyone's time. I also happen to disagree with almost everything he says about educational use, as do many in his profession.

Your second incorrect point has already been addressed. If you can't figure out on your own how creators are also users (often at the exact same moment), I can't help you get there. I have run into many in this debate with severe ideological blockages, and it's really not my job to break through them.

Speaking of my job -- wouldn't it be ridiculous if a public servant charged with providing support for the literary writing and publishing community was not personally vocal in insisting that community keep its important economic rights under copyright?

You have clearly picked up the free culture habit of using the word "lobbyist" as a lash. Of course, you're wrong about that as well. I am not paid to speak on behalf of artists. I do so voluntarily.

Some good points John, I truly believe all parties should have equal opportunity to have their say. Even self proclaimed biased ones.

But I'm sure your aware there are parties, or collections of them, on the flip side of this debate who have tried to shut out dissenting voices.

No ones hands are unstained.

I assume your reference to "the flip side" points to those who support continued strong collective rights administration. Next I assume (from previous comment) that by "shut out dissenting voices" you may be thinking of the Copyright Board of Canada's process on hearing evidence when setting a tariff rate. If my assumptions are correct I must ask: Do you seriously think the Copyright Board is being kept in the dark regarding divergent views on the value of those tariffs? Do you think extending hearings to accommodate everyone with an opinion is a good use of available resources? Or perhaps you are one who thinks that unique Canadian institution is not valuable in the first place. Inquiring minds need to know....

Unsurprisingly, I agree with Sandy.

I don't really understand all the drama around Access Copyright's request to limit the interventions in the tariff dispute. It is in the interest of that collective to have the tariff decided as soon as possible, and since this is an industrial negotiation/dispute between a copyright collective and the educational institutions who are signatories to previous licenses, it seems perfectly appropriate -- and fair -- to limit the interventions to those parties.

I doubt very much there is anything more individuals and extraneous groups can add to that debate that would not already be covered in detail by education's official spokes-group. I happened to write a letter of support, and would be happy to just have Access Copyright represent my interests there. I certainly feel no need to show up and reiterate my points; but for some reason all the complainers must be heard.

Frankly, I see the "complain to the Copyright Board today!" campaign - expertly run by Michael Geist and Howard Knopf - on this tariff dispute to be just more of the exact same playground bullying I discussed in my posting.

There is ongoing confusion on the free culture side between the concepts of representative democracy and mob rule. The repeated tactic is Get as many people to shout as loudly as they can as often as they can, and maybe the other side's point won't be heard. It's despicable.

Despicable? I'm afraid your faith in traditional power brokers is a little old school. I'm sure the protesters in Egypt would have a thing or two to say on that.

Now, I'm not really comparing the copyright board, a content collective nor a league of university administrators to a corrupt dictator, but the reality that is emerging today is one of more public participation, or at least awareness, in decisions that effect their lives. See the recent UBB confrontation for a timely example.

Now you may not like or agree with this trend, but never the less here it is, and it's only going to increase.

Call it despicable, vile, revolting .. whatever helps you sleep at night. But if governments, regulators and businesses do not adjust to this new reality then they will not continue to be relevant.

Access copyright was not necessarily wrong in their approach, just a little outdated.

Let me just add that I do not think that increased public participation in sometimes complex issues is necessarily always going to be a good thing (though awareness can't hurt).

I am just pointing out the trend I see and likelihood of it being an increasing influencer.