from slacktivism to substance 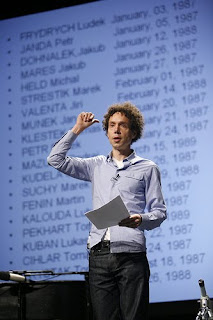 Ex-pat Canadian writer Malcolm Gladwell got a lot of hardcore tweeters hot under the beak this past week when he suggested in the New Yorker -- Small Change: Why the revolution will not be tweeted -- that activism using social networking technology just doesn't have the same heft as movements for change back in the good old days. Gladwell takes a withering swipe at what he calls "the outsized enthusiasm for social media," dismissing recent Twitter-revolution incidents (Moldova, Iran) as little more than the hyperbolic excitement of North American couch-revolutionaries.

Real social activism, he suggests, is hard, often dangerous work, and furthermore it relies on strong ties between participants.

"The kind of activism associated with social media isn’t like this at all. The platforms of social media are built around weak ties... [and] weak ties seldom lead to high-risk activism."

Gladwell's article rubbed some folks the wrong way. Leo Mirani in The Guardian wrote Sorry, Malcolm Gladwell, the revolution may well be tweeted, which (as the unimaginative title suggests) disagrees with Gladwell and points out that Twitter has a valuable organizing and consciousness-raising effect on social change (he uses recent events in Kashmir as an example).

Of course, Gladwell is aware of the organizing and information spreading effects of social media. His point is, rather, about what comes after consciousness raising. It's all well and good to get thousands, tens of thousands, hundreds of thousands of people to click their agreement about the importance of this or that thing, but how many of those folks will then actually DO something to affect that thing.

Consumer advocates in Canada regularly point to impressively large numbers of folks on Facebook who have indicated they believe in "fair" copyright reform. At last count, there were some 80-some thousand folks signed up to the main Fair Copyright for Canada group. Signing up required one click of the "Join" button on Facebook; and as I have noted elsewhere, membership in Fair Copyright did not even require an understanding of the underlying advocacy position of the group (which is decidedly copyleft and user-focused). I wrote about this a couple weeks ago, and announced that I felt it was time for me to unclick from the group (I was one of the first 100 members, I believe).

I left FCFC because, as far as I could tell, the group had been reduced to five or so regulars who posted content (all of it leaning copyleft, except my posts), a handful of nasty commenters who liked to insult me, and 80-some thousand names of folks who simply were no longer paying attention.

Since unclicking myself, I noticed a couple hundred other members leaving the group and today, strangely, the group itself disappeared from my Facebook interface. It's just gone. Poof. 80-some thousand copyright activists suddenly no longer active. Instead, there is a much more modest Fair Copyright Facebook "page" that asks folks to "like" it rather than "join" it. 4700 or so have liked Fair Copyright, for what that's worth (I mean, who doesn't like a vague notion of fairness?).

So, what happened? Well, I think Gladwell happened -- or at least Gladwell's observations about social media activism proved to be mighty accurate in the case of copyright reform. It is just not a topic that inspires a lot of motivated interaction that isn't the typing of comments into a blog argument-stream. It's not a real march-inducer, or at least it doesn't seem to be one for the copyleft side of things.

As we know from the federal government's townhall and online consultations pre-Bill C-32, copyleft activists will sign online petitions and form letters with great abandon, but for the most part they won't show up in public to express their views into a microphone. I seem to recall that consumer advocate Michael Geist has been involved in a number of attempts to motivate copyleft protest on the subject of copyright reform. The results -- a dozen or so sad-sack sign carriers in the snow at Queen's Park a couple years ago, a weird flash-mob of another couple dozen in then Industry Minister Jim Prentice's constituency office and about 9 folks at a recent Calgary "rally."

Last week, I participated in a panel discussion on Bill C-32 at Toronto's Centre for Social Innovation. The evening was organized by the Documentary Organization of Canada (DOC), and featured David Fewer of CIPPIC, Philip Smith from Community Bandwidth, Cameron McMaster from DOC, Erin Finlay from Access Copyright and me. About 40 people showed up, mostly independent filmmakers or other professional creators and those who work professionally in the cultural sector. Not only did they show up, but they stayed for two and half hours, and engaged intelligently and critically with everything that was said.

How is it possible that without the massive power of Fair Copyright's connectivity, the DOC panel managed to attract more people that the average Fair Copyright rally?

It's possible because the audience for that panel probably falls into Gladwell's "strong-tie" definition. These are folks for whom copyright fairness is not a vague notion having something to do with whether or not they can PVR Glee. For that audience, copyright fairness is about making a living (or not) from their art. And, he remarked modestly, I don't think it would be an exaggeration to say that the copyleft viewpoint had a rough go of things on that evening.


---
BTW -- if you can still see the Fair Copyright Facebook group, let me know. And if you're a professional creator unaware that group was not really working for your interests, now would be a good time to unclick.

UPDATE: A couple of folks have mentioned the Fair Copyright main group still exists. You should be able to access it at that link. I have no idea why it was unavailable in a Facebook search at the time I wrote this posting, and I notice it is a good 200 members lighter these days. I guess others were as tired of the rhetoric as I was.
Posted by John at 4:03 PM

I personally only care about the over protection for digital locks that is both unneeded and doesn't actually prevent anything that people say it does. If the rest of the copyright people want to change other parts, or hang themselves when they try to change something so that it doesn't actually fit for future changes of technology, they are free to do so.

I looked, and yes, it's still there. Here's the link, you should update your article.

Sorry for the second post, it didn't give me the follow up comments option the first time - feel free to delete this one.

There you go again, dismissing people and their concerns. I am on that facebook page frequently, just because I haven't contributed there doesn't mean I'm not invested. I choose to keep up to date there.
I know none of this jives with your "Mainstream views", I guess that's why you're so intent on dismissing the masses in favor of the mainstream

As a 'Professional Creator' I can assure you that NONE of these groups is working in my interests. Not one group has yet adopted my suggestion that copyrights be non-transferable except as an inheritance, something that must be a major part of any type of copyright reform.

Nor are they considering the misuse of the 'work for hire' concept.

In fact the big boys (Sookman, Gannon, Geist, Knopf) have not even addressed the issue.

As a result, I've decided to get intellectually nasty to them. There's more than one way to skin a cat [EVIL GRIN].

By joining an online group, it's still representative of an individual's genuine concern for an issue- and an attempt to influence the debate. This can sometimes change the outcome.

Attendance at a rally is not representative of a cause's importance either. Take the numerous environmental issues that most consumers care about, and compare that to the percentage of activists who actually attend the rally's.

The line isn't drawn in the sand as clear as numbers show. Support for balanced copyright exists- awareness is what needs to grow. Online advocacy is a proven starting point.

Ironically I think social media can help but Gladwell is right those who really believe in something and those who will just quickly make an uninformed click are very different.

Good points John. Copyright reform is extremely important to people involved in creation, and the turnout at the consultations and rallies speaks volumes about how people really feel about copyright reform.