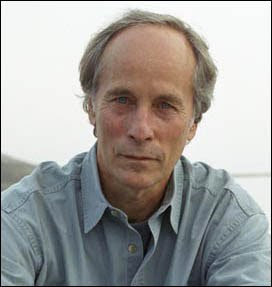 Last night I attended the PEN Canada benefit kicking off Toronto's International Festival of Authors. The event featured American novelist Richard Ford in conversation with CBC's Eleanor Wachtel. Ford spoke candidly about his childhood in the American south and about his discomfort with the surrounding racial tensions and who he felt himself becoming in that social milieu.

At the end of his talk, Ford thanked PEN for the "important work it does for the world, unbeknownst to most of the world."

The evening featured an empty chair on the stage, symbolizing the absence of Iranian-Canadian writer, blogger and freedom of expression activist Hossein Derakhshan who is currently serving a 19 year sentence in an Iranian prison. Mr. Derakhshan was arrested in Tehran while visiting relatives. His persecution is in response to his work as a blogger and outspoken critic of the Iranian government.

I urge everyone to visit the PEN Canada website, and help spread the word about Mr. Derakhshan's plight.

This is a very commendable effort with respect to Mr. Derakhshan. John I must applaud you for taking the time and writing about this.

However, my support towards the effort to free Mr. Derakhshan went to a more reputable organisation Reporters Without Boarders, who has been on top of this case for months and has very publically called against the Graduated Response laws.

My support and effort will remain with those who are not associated with the Graduated Response laws, and would ask that those authors and journalists that carry a moral obligation towards democracy, to not support the PEN effort, and put your money to an organization that truly supports constitutional rights and has a global reputation of doing so, such as "Reporters Without Boarders"

Your comment is a perfect example of the inflexible extremism I find so disheartening in the copyfight.

My posting was all about calling attention to an obscene act of repression, and to raise awareness about an organization that does incredibly important work for the world's writers.

It takes a particularly narrow and dogmatic view to introduce competition between two advocacy groups on this campaign.

I am well aware of RSF's position on graduated response, and while I wish they would make a finer distinction on the issue, I would never use that disagreement to discourage anyone from supporting their important work.

"Your comment is a perfect example of the inflexible extremism I find so disheartening in the copyfight."

I'm not involved with any "copyfight" John. I’m just simply stating my opinion here as a Canadian. Reporters without boarders has been working on Mr. Derakhshan's case for over 2 years, why so late with PEN, or does this just seem to be the cool thing to do now 2 years later and after many publishers and writers are trying to recoup their reputations based on repressive positions they have taken on copyright?

I would rather put my support behind an organization that I know is very publically against policies that limit the freedom of the press, and have a long standing relationship with this case.

I'm not trying to discourage anyone from supporting this effort, just have to question the motives and timing here. It seems a bit suspicious to me, and not a very genuine effort on the part of Canadian writers and publishers, I hope I’m wrong.

Your hope has been realized. You are indeed wrong about the timing of the effort by PEN. PEN has been in direct contact with all the governments involved in this case since Mr. Derakhshan's arrest.

The suggestion that this respected FOE advocacy group would have a cynical motive behind their recent benefit is ... well, sadly, typical of the kind of wild accusations I've come to expect from the copyright debate.

"well, sadly, typical of the kind of wild accusations I've come to expect from the copyright debate."

They are not accusations John, they are legitimate questions considering the support you have for the Graduated Response. I’m not part of the copyright debate anymore Degen, I’ve had my say already, and “unclicked” myself from any affiliation quite a while ago now. I personally don’t care what copyright policy is put into place right now, as long as it doesn’t infringe on the rights of Canadian Fundamental Freedoms or creators. I don't know exactly what you could label that view on the spectrum of the copyright debate, maybe "Canadian".

I think it’s important to question the motives of any organization that has supporters that are linked to the graduated response, and are coming out in support of the exact same section of the charter in which the Graduated Response would hinder. Speaking of which, what’s PEN’s official position on the Graduated Response? Never mind, I’ll ask them. If they are against it, I will help promote their efforts towards Mr. Derakhshan.