Wacky conspiracy theory alert! I don't actually believe Google has a secret world-domination laboratory on a private island, but on days like this... 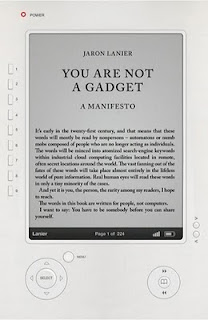 Lanier's You Are Not a Gadget (YANAG) takes the often stupendous mystery of the digital realm and turns it into stories about real people with real ideas -- and many of the ideas (and people) are so crazy-flaky, it's hard to believe anyone ever actually took them seriously in the first place, let alone continue to. The noosphere, the singularity... go ahead, Google* those suckers and see what Wikipedia* has to say about them.

In chapter 6 of YANAG, Lanier introduces us to the Lords of the Clouds, those lucky few who have managed to be in the right place at the right time to become extraordinarily wealthy on the cooperative and freely-given efforts of the now billions of internet users around the planet. Cloud Lords own Twitter and Facebook and Google; and while we use their products and think how marvelous it is that we don't have to pay to do so, the cloud lords are still managing to fill northern Californian mansions with Citizen Kane-like treasure because they control the levers and switches that allow us to do web searches, load embarrassing photos of each other online, and broadcast our lives 140 characters at a time. BTW, does everyone know that NBA star Chris Bosh had belgian waffles for breakfast this morning before breaking Toronto Raptor fans hearts? I do, because I follow him on Twitter.

The free-ness of our collective efforts is absolutely key to the cloud lord business model. If these algorithmic wizards actually had to pay for the content, activity, personal information and eyeballs they provide to advertisers, their margins would be cut substantially and, you know, other people would also be making money from the Internet.

So it is we get the spectacle of Google initiating a commercial scanning of entire libraries full of books without asking the permission of publishers or writers. So it is we hear after the fact when Facebook has made yet another change to its unique revenue model that peddles our privacy on the digital street. Requests for permission, respect for intellectual property, even payment for professionally produced content... all these things slow down humanity's inevitable march into single-consciousnesshoodocity. They also, presumably, slow down the Ka-ching sounds emanating from the American west coast.

How do we get to a point in our social history when so many of us are happy to say - yeah, the music industry... whatever. Since musicians love to play music, and since youTube will make it all freely available, there will always be music. Who cares if no-one makes a living at it anymore?

How do we get to this point? Well, perhaps we are taught to think that way. You want a new generation of free content producers to take the place of the old fuddy-duddies who like to get paid for their work? Go to the source for impressionable youth seeking easy rebellion from the old way of doing things -- go to the universities.

Want free content? Call it something even more attractive than "free;" call it "open!" Want your business model to seem less like raw capitalism and more like fun? Don't call it a business model; call it a movement. Kids love movements.

Anyway, perhaps you see where this is all going. One could build a pretty little conspiracy theory out of the idea that so much of the open content, free culture energy comes out of universities because that's where the cloud lords want it to come from. How better to guarantee a future of happy, compliant free-content providers than to encourage the academy to teach that happy compliance?

How would the cloud lords manage such a crazy conspiracy? Well, in my fevered imagination it would involve a lot of cackling and rubbing of the hands together in evil glee, perhaps on the appropriately named Nomanisa Island (Incredibles reference).

from The Daily Beast -- Harvard Law star Jonathan Zittrain is an influential critic of Apple—so why doesn’t he talk about donations to his research center from Steve Jobs’ competitors?

Read the whole story, Harvard vs. Steve Jobs, by Emily Brill at the Daily Beast link (above).

*Google and Wikipedia can be thought of as participants in both the noosphere and singularity -- so now you get the joke I was trying to make.

This is conservative party or even tea-party "anti-elitism".

It is when an elite claims that others are elitist.

It is pretty funny when you read this and then you remember that you fully support TPM (technical protection measures) and you have defended them before in the past.

You complain about Facebook changing terms of service on you and exposing your information? Well didn't you read the terms of service? Your phone company does the same thing to you, so does your employer (in the employment case you can gracefully resign with severance).

What does this have to do with TPM? TPM can change on you at anytime, one connection to the network and the new TPM has been downloaded, installed and loaded. Bang, you're not systematically and automatically subject to any change in the terms of service (because you wanted to read that ebook or watch that digital movie right?)

The world changes under your feet, you don't agree yet it still happens, you have no choice. It is this or you have no access whatsoever to the media that you probably paid for.

Then don't buy TPM infested this and that you say. Fine I won't. But wait, if I agree to any user agreement or anything else I am now suddenly subject the ephemeral terms of service. I can have TPM injected into my software, my music, my videos all with my consent (I clicked yes on an agreement that I couldn't comprehend because hey I'm not a lawyer).

If you read C-32 you'll find there's a whole slew of these web2.0 copyright exemptions.

Why do you support this bill now?

In reverse order, then:

Libertarian-dude - who's attacking what now? I share my work for free every day. Welcome to my blog.

Do you not find it interesting that quiet "free culture" money is making its way to very influential legal theorists? If the world goes sharsies, who am I to hold back that tide? But I reserve the right to wonder if there wasn't a better way to do it that didn't involve billions concentrated in half a doZen wallets, while YouTube stuntsters head back to their McJobs.

Kenneth - please explain where it is you learned I "fully support TPMs"? Since that statement is untrue, I have to wonder who is spreading this misinformation about me to people with whom I have never spoken.

I have my own theories about the efficacy and lifespan of TPMs, but I DO actually believe anti-circumvention guards an important principle of ownership. There's no point having a lock if society provides zero discouragement for breaking it. I also believe that if a Corp. abuses the privilege of the lock, our legal system will provide relief for consumers. Despite the hyperbole re: C-32, we don't live in a corporate dictatorship (at least not until Google unleashes its ultimate domination).

As to C-32, I support Canadian Parliamentary democracy. Don't you? The bill needs amending. Let's amend it, and pass it, and move on.

Anonymous - huh? The only thing I can figure is you are calling me an elite because I foolishly wasted
my prime income earning years writing poetry. Okay, guilty. That sure does excuse Harvard's potential conflict of interest.

whoops, turns out I responded to Libertarian on the wrong thread. Hard to keep track of who is disagreeing with me where.