when a crowd turns ugly 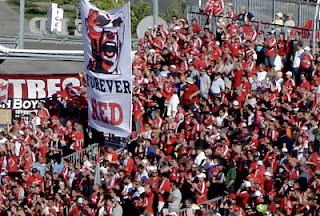 When the Toronto Blue Jays won their second straight World Series title in 1993, I was working a cultural industry tradeshow at a downtown Toronto hotel. The show ended just as the final game of the series was winding down, and I managed to see Joe Carter's famous home-run blast in a hotel bar crowded with suddenly exuberant Torontonians. As I left the hotel, I noticed a rowdy stream of people heading for Yonge and Dundas, one of the city's spontaneous gathering places for crowds.

Naturally, I joined the stream. Thousands of people packed the intersection and all of Yonge Street for blocks north and south. A huge celebration was taking place. It was exciting and fun… until it suddenly wasn’t. As I worked my way toward a large video wall outside the HMV record store (they were repeating game highlights) I came to the realization that I was no longer just in a crowd, I was trapped in a crowd. We were packed shoulder to shoulder, and I felt real pressure from the mass of bodies around me. There was no room to move, and when the crowd lurched this way or that, I had no choice but to lurch along. I’m a big guy, but my combined weight and strength could do little to control my direction.

I felt panic rising in me, and that’s when I saw the two young women. They were maybe 16 years old, and they had been completely exhausted by their own fight to get out of the mob. They were crying and on the verge of hysteria because they simply could not move, and probably felt as I did that they could be crushed if they ever lost their footing. Using a combination of yelling, arm-waving and pure physical intimidation, I forced my way through the tightly packed mob and acted as a football blocker for the two women. I stepped on feet, forced people left and right and finally got the three of us to a relatively clear section of sidewalk on Edward Street near the World’s Biggest Bookstore.

The line between joy and ugliness was mighty thin for me in that experience, and ever since then I’ve been leery of crowd dynamics. I’m not saying anyone in that celebrating crowd would necessarily have wanted to do anything stupid or violent or even criminal but, if they had, what could possibly have stopped them? Crowds can work with an inertia that is beyond control, and there’s little predicting what they’ll do. These days I do my celebrating in small groups, and when I do find myself in a crowd, I watch it carefully. I have the same mild demophobia when it comes to the Internet, which has weird crowd dynamics all its own, and which are often amplified by the ‘net’s anonymity and immediacy.

The New York Times’ John Tierney has written a science column, The Madness of Crowds and an Internet Delusion, about the 'net and its sometimes mobbish qualities. In it, he highlights some fascinating trends in social interaction and even ethics. It is a timely and clear-headed critique of the very trendy notion of open culture.

Here are some highlights, and the full article can be read at the link above:

[Digital theorist Jaron Lanier] blames the Web’s tradition of “drive-by anonymity” for fostering vicious pack behavior on blogs, forums and social networks. He acknowledges the examples of generous collaboration, like Wikipedia, but argues that the mantras of “open culture” and “information wants to be free” have produced a destructive new social contract…

“An intelligent person feels guilty for downloading music without paying the musician, but they use this free-open-culture ideology to cover it,” Mr. Lanier told me. In the book he disputes the assertion that there’s no harm in copying a digital music file because you haven’t damaged the original file.

“The same thing could be said if you hacked into a bank and just added money to your online account,” he writes. “The problem in each case is not that you stole from a specific person but that you undermined the artificial scarcities that allow the economy to function.”

Thanks for the link, and the tip.