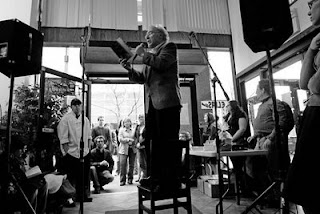 Today I received a rare good news story about the economy -- at least the micro-economy that is poetry. Marty Gervais, publisher of Black Moss Press in Windsor, Ontario sent me details of a recent book launch he organized in his hometown, which has been so poorly treated of late by the near collapse of the auto industry.

"With the economy being so bad in Windsor where auto workers are losing their jobs and others are in danger of losing their homes, and the city is pondering on pulling the plug on the Windsor Symphony and the Art Gallery of Windsor, it would seem that poetry would be the last thing on anyone’s mind.

But on April 2, in front of a popular Windsor diner on the city’s main drag — Ouellette Avenue — a crowd started to form. These were people wanting to get into a poetry reading by Midland writer Roger Bell and Hamilton poet Marilyn Gear Pilling. Black Moss Press was launching their new books at Elias Deli."

Having reached the venue limit of 120 people, and with stern warnings from the fire marshall, Black Moss quickly arranged for sound to be broadcast onto Ouellette Avenue, and for hot coffee to be served to the overflow crowd of 50 or so milling about outside. The poets, meanwhile stood on chairs in order to be seen as well as heard.

“It had to be a first for Windsor, where people stood on the main street and wouldn’t leave because there was poetry going on inside,” said Karl Jirgens, the editor of Rampike Magazine and head of the English Department at the University of Windsor. 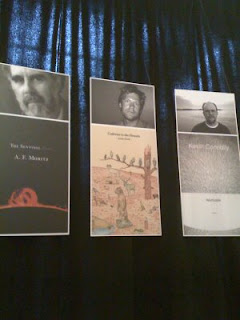 As well, the Griffin Prize shortlists were announced this morning at le Select Bistro on Wellington Street in Toronto.

... and the Canadian Shortlist:

Congratulations to Ontario publishers House of Anansi and Coach House Books, who share the Canadian Shortlist this year, and to Ken Babstock and Alana Wilcox who shepherded these outstanding collections into print.

I can't help noticing that Ontario is home to all three shortlisted Canadians. I have read them all, met them all, and drank beer with two out of three. It's going to be next to impossible to make my Canadian pick in the Griffin pool this year.