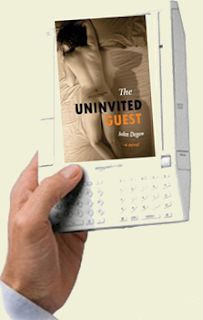 (thanks to The Savvy Boomer for this image)

Last weekend, the Globe published my essay on copyright (yes, it is actually behind a pay wall now, but the online journal Straight Goods has republished it with my permission). The section editors very cleverly headlined the piece, "Who needs copyright, anyway?" They know what they're doing, apparently, because I wouldn't have predicted the amount of traffic to the story and to my site for an article with a less controversial headline. Mathew Ingram has given the piece a second weekend boost by blogging about it and the book giveaway in his technology column at the Globe. Thanks Mathew.

Reaction to the article and the giveaway has been... interesting.

I spent more than a bit of time last week on damage control, convincing some fellow writers that I had not gone over to the dark side. Headlines really shake people up, apparently. For the record, the answer to the question in the headline is... me, I need copyright. And I say so in the piece.

Meanwhile, over at the Fair Copyright Facebook Group, response has been cautious. I posted the article there myself and received exactly zero comments on it, but a separate discussion sprung up in which I was congratulated for recognizing the future, and lectured about the difference between "price" and "value." Previously unknown to me -- it turns out a lot of things we value are free, like butterflies and love, etc. I will continue to monitor the economic results of my experiment and report back to this group on the butterfly effect. Interestingly, this Facebook discussion of my article has currently ended with a call to overthrow the government in 2009. Not quite sure where that came from, but I'm glad they're keepin' it real over there.

Writers tend to want readers, and so the traffic to my free download has been very gratifying. Many, many hundreds of folks from around the world have already downloaded the novel, and that's just the traffic I'm aware of. I can't track sharing beyond the virtual walls of this site.

On the money side, I have received $5 in donations. Early results, of course, and I'm trying not to make a value connection just yet. An expanded and, hopefully, interested readership is priceless for an author, especially one toiling in small market literary fiction. I will watch for the side-benefits of this new readership and report back. I already know, for instance, that someone who sits very near me at Toronto FC soccer games is a new reader, and there has been at least one offer of beer in exchange for the download.

Bookninja.com started a great discussion about the giveaway, and I want to thank George Murray over there for capturing exactly what it is I'm trying to do. It's nice to be understood.

A lot of law folks have linked to the site, and responded privately. All in all, I would say the feedback has been positive. One of the reasons for doing all this was to get everyone talking, as opposed to shouting, again. I think that worked. Good for us all, as we await the federal copyright reform bill.

Missing in all of this, for me, is reaction to the novel itself. A commenter on Ingram's blog noted he decided not to download the book because it has hockey in it. "Free or not, how to bear a novel about hockey? Ugh," he wrote. I wonder how he feels about butterflies.
Posted by John at 9:28 AM

"On the money side, I have received $5 in donations. Early results, of course, and I'm trying not to make a value connection just yet. An expanded and, hopefully, interested readership is priceless for an author,"

I am thrilled to see what you are doing here John, but I am worried that you might be seeing this one step as the beginning and the end of a 'free' business model.

Frankly I wouldn't expect much more than the $5 you've already received in a donationware business model. If you are thinking that accepting donations will create much of an income, you are setting yourself up for disappointment.

You talked of an expanded readership, which indeed giving the book away will generate. That has to be followed up by offering something tangible to your new readership. I don't know a lot about the book business, but things like signed and inscribed hard copies, more essays like to did for the globe, previews to your next book (allow your new and old fans to participate in the editing) come to mind as revenue sources. I'm sure there must be others.

Just don't give the book away online, then complain that the business model doesn't work 'cause you only made 5 bucks in donations.

There was actually a good article in Techdirt about this yesterday.

The main point of the Globe article, of course, is that whatever business model I employ for selling my writing, I am the one employing it. I think the marketplace needs to recognize the difference between 'free' and 'uncontrolled' -- and for the most part, I believe Canadians do recognize that distinction.

As a professional, I don't want to live on tips or donations. I want the value of my hard work to translate into concrete returns in one way or another. The donation button is part of this particular experiment, but I don't expect a whole lot from that model.

Interesting to me, most of the expansions on the free business model being discussed and analyzed are also grounded in strong creator copyright.

"Interestingly, this Facebook discussion of my article has currently ended with a call to overthrow the government in 2009. Not quite sure where that came from, but I'm glad they're keepin' it real over there."

Thank you for marginalizing a legitimate concern. Why I suppose if there's advertising on the wall posting which hasn't been reported yet, then the group is nothing more than an advertising front too? There's bound to be some people who are a bit more radical online because... it's the inter-web.

That being said the group wasn't formed on having a free for all for downloading copyrighted material. It's for addressing the part of the bill that says we are allowed to make a back up copy of something and yet not by-pass electronic locks. If by passing digital rights management is illegal it might as well be said we cannot make any back up copies of music and do away with the entire I-Pod industry. If a second Sony Rootkit incident comes around I suppose we'll just have to sit on our hands until Sony says we can remove their digital rights management?

The other provision which irks people is the part which makes it illegal to unlock cellphones. You buy a cellphone with outrageous roaming charges. Then you can't buy a phone card in another country so you pay less money? It's protectionism by the cell phone companies.