tales of the back catalogue (sort of) 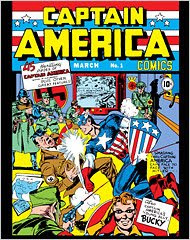 Today the New York Times has a story on one of my favorite comic characters, Captain America. What can I say, I like mighty shields.

The article contains this interesting passage:

On the frontier of a new industry, writers and artists creat[ed] scores of characters, but publishers profit[ed] from them.

These days creators have learned from the past by self-publishing or otherwise securing the rights to their progeny. But some of the founding fathers of American superheroes are still seeking justice. Just last month a federal judge ruled that the heirs of Jerry Siegel, a creator of Superman, were entitled to claim a share of the United States copyright of the character. Time Warner, which owns DC Comics, would retain the international rights.

“That’s great,” the bespectacled Mr. Simon said. “Jerry Siegel started it,” he added, referring to the effort by Mr. Siegel’s wife and daughter in 1997 to secure the copyright to Superman. (Under a 1976 law, heirs can recover the rights to their relatives’ creations under certain circumstances. Mr. Siegel died in 1996 without major compensation for his character.) That family’s stand inspired Mr. Simon’s own claim to Captain America in 1999.

Captain Copyright may have been forced into an underground hideout by mobs of pot-crazed anarchists (or something like that), but he still manages to save the odd widow and orphan.

And congratulations to Wikipedia on that fair and balanced article about Captain Copyright. Good to see new media isn't falling into the same patterns as old media.
Posted by John at 2:22 PM

I am happy for Siegel's heirs. It is good that he has been able to reclaim some of his rights. That does not change the fact that it would still be better if the duration of these rights were measured from the day of publication rather than date of author's death.

Unfortunately for every widow and orphan saved by Captain Copyright, there is at least one other who falls victim to his crime racket too.

C.C. Beck was the creator of Captain Marvel, but was embittered by a legal battle with D.C. Comics who claimed that his character was a copyright infringement of their Superman character.

He settled out of court, but if he had been found guilty, then I expect, Captain America, your beloved Captain Copyright, and every other super hero we have all enjoyed over the years would also have been considered violations. Siegel's heirs would certainly be well looked after then eh?

Under a 1976 law, heirs can recover the rights to their relatives’ creations under certain circumstances.

I'm surprised to see John apparently approving of this. What the US congress effectively did is to say "regardless of the fact that the person owning these rights legally signed them away to somebody else, we're going to give that person's heirs the ability to retroactively revoke that contract"

Why on earth should they have that ability ? There are very few situations where you can get out of a freely-entered legally binding contract, and for good reason - presumably the publisher was relying on that contract and spent a lot of money on the basis that it had secured the rights necessary to turn that expenditure into profit.

What if it were the other way round ? If Congress decided that the publisher should be able to retroactively revoke the contract, perhaps because it's not as profitable for them as they expected ?

For some reason, creators are assumed to be incompetent business people (and, presumably, unable to recognise that fact and secure the advice of somebody better able than themselves), so legislatures give them rights to retroactively revoke contracts and to royalties (an assumption that they're unable to negotiate a fair price for their work up front). Personally, I find it pretty insulting.