Thanks to Angie Gallop, writer and literature promoter of Thessalon, Ontario for putting together this press release regarding my upcoming long drive north: 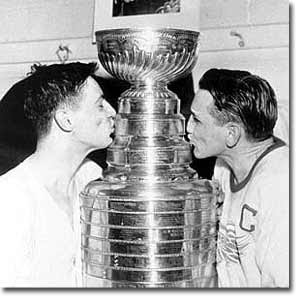 A 1952 photo of Detroit Red Wings’ Captain Sid Abel and goalie Terry Sawchuk kissing the Stanley Cup placed an idea in author John Degen’s head that lead to his book The Uninvited Guest, one of this year’s nominees for the Amazon.ca/Books in Canada First Novel Award.

“I got to thinking about everyone who might have been standing around those two guys at that moment, but who didn't manage to make it into the photo. The story of Stan and Tony came out of that idea, and the idea of someone who maybe doesn't want to stand at the side of history, but is forced to anyway,” says Degen about the impulse that lead to his novel.

The book is a bizarre and comic tale about a failed hockey player who will never lift the cup in victory but who is instead given the job of escorting it around the world; watching victorious players celebrate; and then cleaning up after the party.

Degen, who works on behalf of writers every day as the executive director of the Professional Writers’ Association of Canada, is traveling north to do a series of readings this summer. He’ll be on hand to sign books and chat at Chapters Sudbury 12:30 p.m. on Wednesday August 15th ; then on to the town library in Thessalon 2-3 p.m. on Friday August 17th ; then that evening at 7 p.m. he’ll be at Sault Ste. Marie’s Uppercase Bookstore for a night of reading and music.
Posted by John at 12:22 PM

I'm a poet originally from the Sault. I think its fantastic that poets are rediscovering the near north. Purdy did it in the 60's but whatever exposure we can bring to this awesome landscape is tremendous. I'll be up in the Sault in mid August and hope to catch your show there.
PS- Look out for moose and roadkill.

Thanks for the reminder. I once had a job burying roadkill, but we never dealt with moose.

Is your book about a hotel in Norwood, Ontario? Pretty little town, Norwood. Love the water tower.

Good to see that you had a successful tour up North. My wife and I really enjoyed your reading in the Sault.We've got pix of that event if you need them....Also, I've been in contact with Marty Gervais a local poet and newspaper writer from Windsor. He's a terrific Red Wings Fan and would love to know more about the local angle with the West photo. He says he may be able to do a write up about it. Who knows,maybe more exposure for the book down here in the deep south.