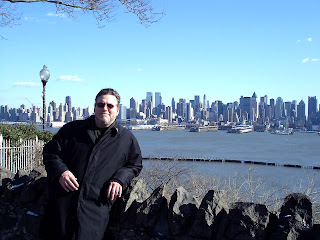 If you're hitting Manhattan anytime soon, check out the website Local Wine Events for wine tastings and classes during your stay. There is something wine-ish going on in NYC every night of the week, every week of the year.

I was there primarily on vacation last week, but managed a couple of entertaining evenings of wine and food surrounded by New Yorkers. As mentioned below, Unwind With Wine is a themed and regular wine and food appreciation event organized by Hanna Lee at the Jolly Hotel at 38th and Madison. Despite the fact that everyone in New York dresses like a million bucks to go out and get a paper, this event felt relaxed and casual. Hanna Lee is like an introducing machine, a classic American hostess who insists her guests not only speak to each other, but that they charm each other as well. I had it easy because I could play the Canada card, which always seems to go over well in this particular American city. 8 out of 10 New Yorkers have been to Toronto or know someone there, and no-one down there seems to mind so much that our basketball team can beat their basketball team without really trying.

Hanna Lee's wine club is a hidden vein of gold for single New York men as the crowd is primarily young, primarily female and entirely enjoyable to look at. Plus, everyone is there to drink and have a good time. Since there is always a speaker on hand to direct the crowd through the tasting, this is like a dinner date without the pressure to make conversation all the time. If you can manage the occasional witty aside, there's a lot of anxiety-free relaxation time. 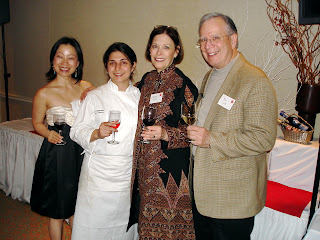 There were between 50 and 60 people on hand last Tuesday evening as Unwind With Wine played host to a cookbook launch for Seduced by Bacon, by Joanna Pruess and Bob Lape. Five wines were paired with five different bacon-inspired plates, and if you're wondering how anyone can work that much bacon into a crowd of fit and health-conscious urbanites, you're not alone. The wine definitely helped, but all credit to the two foodies on hand and Chef Pnina L. Peled, who delivered a restrained tasting menu that was heavy on smoky flavours, but not overly filling.

I was still working off the first-night-on-the-town hangover from Monday evening when I sat down, so I'm sure I can't give a fair assessment of the chocolate-covered, bacon-dusted foie gras. I fear no food, but this was a challenge, and I frankly wouldn't have made it without having first downed a delicious glass of bubbly (Mionetta Prosecco di Valdobbiadene DOC) during the foyer reception.

Five other wines were on hand, two sparklers and three great big reds. Judging by how many people surreptitiously stole the leftover glasses of the fifth wine, it looked to be the room favorite. Quinta do Carmo Reserva 2003 a Portugese/French co-production with high alcohol (14%) and a smoky but subtle action, perfect for the evening's flavours. An earlier Amancaya Cab/Malbec 05 really showed its alcohol on the food, while the Tyrrell's Reserve McLaren Vale Shiraz 03 at 14.5% just about took off my head. Any one of these work nicely on their own but bacon is a real matching challenge. That said, the Shiraz with a seared scallop and bacon combo is nothing to turn away from any hangover. It is the hair of several dogs combined, and it works.

Two other Mionetto Proseccos, a Brut and a Rose had nice crisp fruitiness to clean everything out between courses.