Today in the Book Room, a very special episode of the podcast (just press the "Play" arrow on the pod-player above). Mordecai the puma and I travel to the upper mezzanine lobby of the Fairmont Royal York hotel in downtown Toronto, Canada. There we meet up with Robert Levine, author of Free Ride: How Digital Parasites are Destorying the Culture Business, and How the Culture Business Can Fight Back. 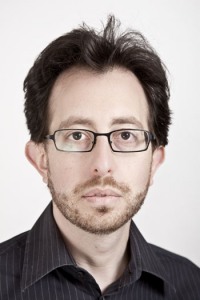 Robert and I have a shared history of arguing for artists rights even as the Internet and the ease of "sharing" cultural products erodes those rights in the eyes of so many tenured consumer advocates. That means we've both had to wade through some of the ridiculous rhetoric of free culture theory, all the while being targeted for bilious attacks by those who prefer their culture to just magically appear without an industry to create it. My response has been to write increasingly depressed blog postings, but Rob has done something far more valuable for the cultural industries.

Free Ride exposes the lazily-accepted falsehoods and extreme rhetoric of free culture theory (e.g. "copyright threatens democracy"), and tracks the decline of professional culture-making from the early days of Napster right up to the edge of this year's SOPA blackout protests from Google and Wikipedia. For anyone with even a half-formed intention to be a professional artist (or journalist, for that matter), Free Ride is a mandatory read.

Here's a bit more about Mr. Levine, in his own words:

Robert Levine has been covering pop culture, technology, and the awkward dance between them for 15 years. Most recently, he was the executive editor of Billboard, charged with running the influential music business trade magazine. He has also been a features editor at New York magazine and Wired. His first job was at HotWired.com, the Web publication of Wired, where he was hired several months after it sold the first banner ad on the Internet.

His writing has appeared in Vanity Fair, Fortune, Rolling Stone, and the arts and business sections of the New York Times. He has offered commentary on the media business for CNN, CNBC, and VH-1, and spoken at the CMJ music conference and the World Copyright Summit in Brussels. He holds a B.A. in politics from Brandeis and an M.S.J.  from Northwestern University’s Medill School of Journalism.


Hey, if you like the Book Room, why not subscribe? You can do so by loading our RSS Feed into your newsreader, or by going to our page on iTunes and hitting the Subscribe button. Both methods are free. That way, the Book Room will come to you automatically, and I won't have to follow you around the way I have been.