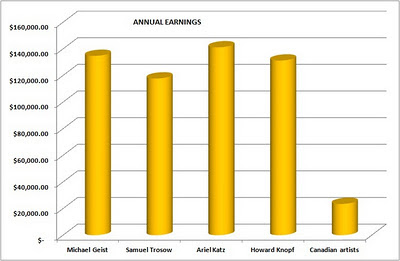 (earnings for Geist, Trosow & Katz from the Ontario public compensation list. Earnings for Knopf estimated by averaging the previous three. Earnings for Cdn. artists based on 2009 Hill Strategies study)

Canada's copyright licensing agency, Access Copyright (of which I am a creator affiliate), has just this week concluded a licensing agreement with two of our largest, most-populated universities. When the University of Toronto and the University of Western Ontario agreed to a new license allowing broad use (in both print and digital formats) of Access Copyright's vast repertoire of works for the reasonable fee of $27.50 per student, they essentially declared a belief that publicly available Canadian content has real value in their classrooms.

One might think that such a declaration shouldn't ever be necessary. After all, who would argue that publicly available Canadian content had no value in Canadian post-secondary classrooms?

Since the negotiation and signing of this agreement (and it was a negotiation - AC asked for $45 per student, and agreed to $27.50 per student) the Free Culture Strategy Office (FCSO) has been in a right panic. You could hear the sound of heads banging on desks as soon as the agreement was made public on Tuesday. So, in some sort of order:

1.  Always classy fair-dealing expansionist, Howard Knopf, raised the specter of national socialism when he labeled the agreement a capitulation by the two universities.

2.  University of Western Ontario Associate Professor Sam Trosow (one of the architects of the Access Copyright opt-out movement) repeated the c-word on his own blog, taking a broad swipe at his own employer for focusing on rebranding when presumably they should have been focusing on not paying artists. Trosow's blog posting is essentially a copy of Knopf's. That's just how these guys roll.

3.  University of Ottawa law professor, Michael Geist, has so far not expressed his obvious exasperation with the agreement, choosing instead to feign objectivity and leave the public teeth-gnashing to his fellow free-culturists. But let history not forget, Geist was calling for the end of Access Copyright licensing more loudly and more harshly than anyone.

4.  Yesterday, University of Toronto law professor Ariel Katz joined the grief parade, following Trosow's example and publicly attacking his own employer for agreeing to pay a license fee to Canadian creators. He went so far as to suggest that by signing the agreement, U of T is somehow participating in the suppression of learning:

"...UofT lost an opportunity to stand up, show leadership, and ensure that copyright law will be used for the encouragement of learning and not for suppressing it."

The suppression of learning?

The attack on Access Copyright's licensing at Canadian universities was complex and deeply ideology-driven, but the free culture circus show was always careful to keep price and the suffering student front and centre.

The wailing we hear now from free culture proves their resistance had nothing to do with the price or the students. This was about inflexible ideology and wanting a win at all costs.

UofT and Western bargained in good faith for a repertoire of established value, and reduced the fee from $45 to $27.50. In announcing the agreement, both institutions highlighted the value being presented to their students. There's only one way you could see this as capitulation, and that's if you would only be happy with no license at all. Tens of millions of dollars for creators come out of this development, all of which would simply vanish if Katz's fair dealing muscle-growth were to be taken seriously.

The great victory for Canada's creators this week has little to do with an agreement that was all but inevitable - no, the great victory is that free culture has dropped its friendly mask once and for all.

We hear all the time "Sure I believe artists should be paid, but..."

As you can see from the bar-graph above, the combined annual earnings for the four* wise men of free culture and fair dealing in education are better than half a million dollars. That such comfortable members of the academic and legal professions can stomach their own advocacy against copyright payment to artists (average annual earnings at about $23,500) can only be the result of ideological blindness. These fellows are so deep into their theories, they can't see the reality in front of them.

Canadian universities use the Access Copyright repertoire. That repertoire is not free. The price Canada's artists ask is fair.


For those unfamiliar with the turn of phrase in my title, here's a succinct explanation from the urban dictionary:

* I don't actually know Howard Knopf's annual earnings, as they are not publicly disclosed. Therefore I have generously allowed him the average of his fellows.
Posted by John at 11:45 AM

If I wasn't in total agreement I might say you were "piling on." But then football is a great game and these guys attempting an end-run around respect for a principle they have claimed to support: compensation for creators, can take, I feel sure.

Actually, I agree about the piling on. I hope to move away from this story as of now.

I just want to make sure that no-one is ever fooled by "free" culture again. It's not about business models and price, and it's certainly not about a choice between encouraging or suppressing education as Mr. Katz so offensively suggests.

It's about individual rights. Every single person is capable of creating work that will enter the cultural marketplace. Free culture plays fast and loose with everyone's rights.

I tell you, I'm enjoying finding new reasons not to allow the comments of the standard free-culture fanboys here on my blog.

So, if all you have to offer is a lamely "ironic" repetition of my own words flipped around to sort of try some kind of point that doesn't quite make it... well, you're out of luck. Go comment on Michael Geist's blog. He loves that kind of stuff.

Have a great day everyone!

To the free-culture folk who keep trying to comment here with "helpful" suggestions about who to add to my charts:

Look, I love that you went and tried to find my name on the public compensation list, and believe me, I'm just as disappointed as you are that it wasn't there.

The problem I have with your dumb suggestions is that they completely miss the point. I BELIEVE in compensating people for their work, so I'm happy that Geist et al make the salaries they make. It remains a tasty irony that they make that money while suggesting that artists shouldn't make money.

Pointing to the (very rare) folks in the cultural sector who make large salaries does not zing me. I'm very happy they make good money - people who respect the rights of others should make good money. I wish as many cultural workers were on the 100K+ compensation list as there are professors. That would be great!

So, here's another new rule for commenters:

Stop changing the subject, and understand what I've written before you reflexively disagree with it.

Thank you and goodnight!