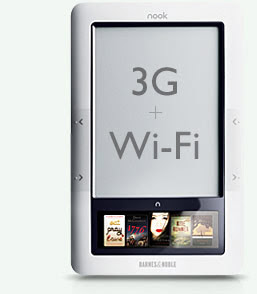 One of the popular criticisms of the various industries attempting to sell intellectual property products (music recordings and books, primarily) in the digital age is that they are, or attempt to be, so restrictive about the sharing of files they end up discouraging one of their own greatest marketing tools -- the word of mouth recommendation and loan to another potential customer. Used to be no-one really minded if you lent a record or a book -- now, suddenly we're talking about making loans illegal. And so on.

The other side of that coin, of course, is the fact that rogue file-sharing sites are about giving, not lending -- and whatever the good intentions of the sharing fan, they do an end-run around an industry's right to set prices and expect payment for the product it spends money to produce.

A middle ground position in all this has traditionally been -- just let the cultural industries catch up to the technology and some form of reasonable lending will return.

Enter the Nook, Barnes and Noble's new e-reader aimed at taking a slice of the Kindle revenue pie. Nook does everything we've come to expect from an e-reader, including sampling and instant purchase downloads from a huge selection of e-books (in the Barnes and Noble e-collection). Behind the scenes in all of this, of course, are rights sales and purchases that keep publishers publishing, bookstores selling and authors eating.

But the Nook also allows its owner to lend an e-book, wirelessly and with the push of a touchscreen, to any friend with compatible technology (including iPhones and PCs, it looks like). There are rules for this lending, of course, just as there have always been. It's a loan, not a gift. There's a time limit (made automatic through technology), and the lender does not keep her own copy of the book while it is on loan. As well, it looks as though publishers are being given a choice as to whether they want their books to be on loan.

So, have we reached the happy middle ground? Perhaps not yet. The tech community has decided to be unimpressed with the restrictions, and we haven't had enough of a test run yet to see if this new way of lending feels enough like the old way. Still, I think we're catching up.

RE: Lending. It's also 1 time ever, per book, and while lent, you can't read the book.

I had really high hopes for the Nook, but I think lending will be as useless as the Text to speach on the Kindle. I haven't bought a book in months that's had that feature turned on :( I miss it.

The issue has many interested parties. Consumers are looking for greater choice and fewer restrictions. The various industries involved in creating and producing these works are interested in a viable market, and respect for their creativity.

The problem with text-to-voice was not that the technology existed for the consumer; rather it was and remains a question of whether or not there is reasonable compensation for that use flowing back through the economy.

I think you'll find creators and producers are happy to use whatever technology arises, as long as it doesn't arise only to cut them out of the economic loop completely.

"I think you'll find creators and producers are happy to use whatever technology arises, as long as it doesn't arise only to cut them out of the economic loop completely."

Yep. Although if you'll forgive me for doing so, I'd change that last word to "substantially"; the Google settlement (which I must admit I still don't fully understand) gives what Elisabeth Sifton has described as peanuts to authors while Google keeps raking in loadsa dough.

Another thought: it seems to me that Cory Doctorow offers a "mix" -- lots of freebies, but offered with the larger aim of selling his books/appearances/t-shirts/whatever. I have to admit, though, I feel uncomfortable with the Doctorow approach; seems not to work in a general sense for most writers.

What's your take on it?