for those too claustrophobic to visit the actual Coach House 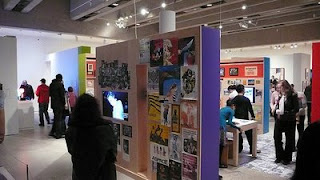 (image courtesy Stan Bevington and the AGO)

If you haven't yet checked out the renovated Art Gallery of Ontario, make sure you get into this magnificent building while the Coach House exhibit is still up. Canadian Art in the 1960s and 1970s through the lens of Coach House Press is a slow meander of pure CanLit nostalgia.

And it is full of light and air, which is not something you can say about the actual quaint structure tucked in behind Innis College in the University of Toronto student ghetto. I love the place, but it always feels on the verge of collapsing upon itself. Dig around for your own Canadian literature metaphor there if you like.

Here's a bit about the exhibit from the AGO website:

Founded in 1965, Coach House Press became a hub of cultural activity and provided a space where people and ideas came together. It acted as a catalyst for the scene’s defining moments, and provided access, tools and space for artists, writers, photographers, musicians, sculptors and designers to create and challenge each other...

Artists were prolific in creating their imagery and circulating it around Toronto, using Coach House Press as a fast means of production. Getting the word out to as many people as possible as quickly as possible was key - not unlike the social networking tools that are so much a part of today’s mainstream culture.

AGO curators Dennis Reid and Georgiana Uhlyarik worked very closely with a select group of individuals who made significant contributions to the Canadian art scene during that time. The participants worked with the AGO’s collection and developed five distinct installations to reflect the times, the ideas, the people and the culture of the1960s and 1970s

And if the idea of a gallery restrospective of Coach House makes you feel old (I was born the year Coach House was founded), imagine how the perpetually childlike Coach House founder Stan Bevington must feel.