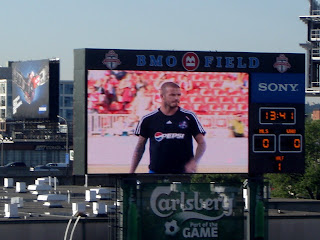 (as close as I could get to Beckham last night)

Major League Soccer held its All Star Game in Toronto last night -- I believe solely to entertain me and my three soccer-loving friends. Nevertheless, more than 20,000 other people showed up for what turned out to be one of the more entertaining games played at BMO this season (I'm a fan, so they're all entertaining, but one must be discerning).

One of the funniest sights of the night was the whole stadium erupting in camera flashes whenever the ball got anywhere near international soccer superstar David Beckham. Beckham takes a lot of criticism for his game and his fame but, really, he was quite possibly the best player on the field last night. He played the full 90 minutes and except for some early tentative runs when he was maybe feeling out the pitch, his effort was solid and crazy with talent.

There will probably be a lot written about the "anthem incident" in coming days. Here's how I saw it. MLS surely made a terrible error when they marched both the English and American flags onto the field and requested we all stand for the playing of those two anthems. There was a general murmur through the crowd, wondering where the Canadian flag might be. Then, when the first two anthems were over, and the team substitutions were being announced it really did seem like the organizers had overlooked the fact the game was being played in Canada. That's when the whole crowd sang a very loud version of Oh Canada overtop of the team announcements. By the time the mounties marched onto the field with our flag, and it became apparent the Canadian anthem was being given special treatment in fact, the damage had been done. Why not just announce all three anthems from the beginning to make sure everyone understood what was happening?

As planning errors go, this one was probably pretty embarrassing for the league, considering this was an internationally televised showcase game for them, and the press turned out in masses for Beckham as they always do. I wouldn't be surprised if someone lost their job over what was all but forgotten by about two minutes into play.

On the other hand, there will probably be no consequences for the chuckleheads in the south end who viciously booed and interrupted both the English and American national anthems as they were being played for the visiting players at BMO. I sit in the west side of the stadium, the side generally considered by hard core TFC fans to be made up of lazy, less passionate enthusiasts. Media, TFC promo and even the TFC players concentrate their fan appreciation on the south end, home to the organized supporter clubs who chant and sing and stand and stomp for ninety straight minutes every game. And why not, the Red Patch Boys and U-Sector and the like have been leading the support for TFC from minute one.

We all love the enthusiasm of the south end, even those of us who like to enjoy the seats we've paid for. But booing anthems? Really? Where's the class?

Here are a couple more photos -- I believe clicking on them will enlarge them: 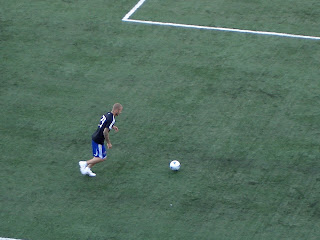 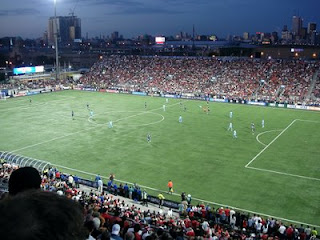 The, "Prawn sandwich crowd," is, I believe, how they refer to us West Siders.

Glad to hear it was a fun game.

Hanging on for a draw? Is that too much to ask?

One of the commenters online said he thought Laurent Robert was putting his corners where a striker should be.

Amado's FK was worth sitting through the rest of the game.