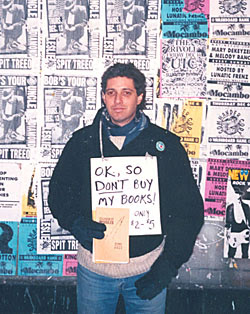 Way over on his very good blog -- bloggamooga -- he's wondering about the Toronto Small Press Book Fair, where it's going and how it might go there, or somewhere better. Stu helped found the TSPBF twenty years ago, and by doing so he donated an incredibly important venue for audience-finding and literature-testing to a generation or two of Toronto writers and publishers. Half the folks I like in Toronto I met at the Fair, and I'll bet there's a lot of Toronto writers who can say the same. So, when Stu speaks about the Fair, we should listen.

In the last few years, kids, work and life in general have taken me far from the Fair, which is a shame for me. That the numbers of the browsing public have dropped by about 90% is a shame for everyone.

Stu's put out a general call to revive the Fair. Visit him over at bloggamooga. Ask him to lunch, and tell him you want to help.
Posted by John at 1:05 PM

Hi John, and thanks for your note
about the TSPBF!

I have some additional contact information - if people are interested in the success and health of the Toronto Small Press Book Fair! One may wish to send helpful comments to the two co-ordinators of the fair, Myna Wallin and Halli Villegas.

One can go to their Facebook site, which I believe is called "Toronto Small Press Book Fair"

they also have a web site:

Please be careful when doing this (for the facebook group), there is another facebook site, called (I think) "Friends of the Toronto Small Press Book Fair" and it is not run by the co-ordinators. Yes, the name of the site is very close, which may lead some to the wrong site. If you want to go that site, go ahead, but if you want to get to the official site, and send in your comments to the people that actually run the fair, choose carefully.

When sending in suggestions, please be helpful, constructive, positive, and supportive. The co-ordinators hold positions which should be respected. I think we all want the fair to succeed.

In support of the Toronto Small Press Book Fair

- david clink
(Artistic Director of the Rowers Pub Reading Series, consultant for The Heart of a Poet BRAVO TV show, co-publisher of believe your own press).