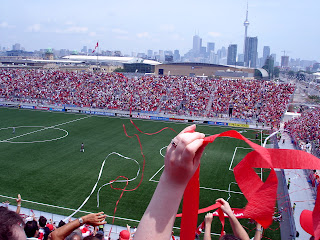 At the risk of becoming that poet who writes about sports in Canada, this spring and summer I've been working on one of the most enjoyable writing projects of recent years -- following the birth and development of Toronto's Major League Soccer team, Toronto FC. I can make a strong claim to being TFC Fan #1 as the very first announcement of a Toronto MLS team (in October 2005) started my "research."

Here's me (right) at La Cervejaria on College Street in October 2006, at the TFC's very first fan pub night, with TFC salesguy Asif Hossain (middle) and Fan #2 -- some guy I see in the city occasionally and wave at. 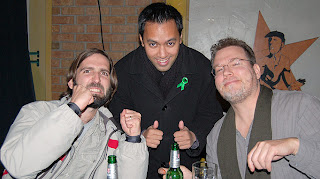 This was the very first fan photo on the TFC site. That evening I met and talked with both Coach Mo Johnston and Captain Jim Brennan, who was at that point the one and only player signed to the team. A few high school buddies and I settled on our season seats not long after.

I've watched every TFC game ever played. I attended winter training at the indoor soccer centre in Woodbridge, and some cold and windy outdoor practices at BMO Field during the spring. I was, of course, present at BMO Field for their historic first goal and first win. I kept my seat cushion, while those around me were losing theirs.

Last night I watched TFC fall 4-2 to Aston Villa in a friendly. I'll be writing up my impressions of that game, and it's implications, for what is bound to be a book on the FC. As much as possible, I'll try out some of that material here.

Isn't great to go to those TFC matches? Much better than the U20 tournament in my mind. Canada finally has true pro soccer...