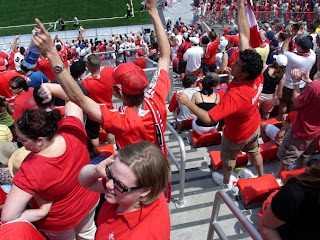 Every FC game the CBC covers, home viewers are treated to the inevitable stand-up from in front of or within the southeast corner of the stands, home to the Red Patch Boys and the U-Sector, supporter clubs in a (mostly) friendly, (sometimes) well-behaved stamina competition with each other. It’s become a cliché of the television and even print media coverage of the phenomenon of pro-soccer uptake in Toronto – a mob of crazed, face-painted Red Patch Boys leaning in toward the camera, giving it their best battle cry and holding their FC scarves above their heads. Team ownership, proving themselves this year to be on the highest plane of sports marketing, embraced these fan clubs from the outset, giving them spaces and links on the official team website and clearly setting them up with gear.

It’s no accident the red and gray confetti guns that erupt at the beginning of each home game are primarily aimed at these southern stands, setting up a great photo-op of rabid, red-and-gray-shirted fans as backdrop. The giant Toronto banner that can stretch across most of the south stands made its very first appearance from that same southeast corner, and its doubtful the Red Patch Boys had the thing printed up. A buddy of mine attending the team’s historic first win and seeing the giant banner make its slow, inaugural creep across the south stands, put on a classically cynical Toronto pose, chanting B M O instead of T F C, while everyone around him, including me, went wild with a mixture of genuine team pride and corporate acquiescence.

But beyond the constructed glare of the TV lights and the strategic marketing tactics, there is something undeniable about the FC phenomenon even to the most cynical Toronto sports fan. Without having put a single boot to the pitch in genuine play, a North American professional soccer team sold out its store of season tickets (14,000 at the cut-off point, in order to reserve some single game tickets) and has yet to not sell-out its suddenly inadequate-seeming 20,000-seat outdoor stadium.

The FC has been brilliant at mobilizing a pent-up soccer madness in Toronto. Even in what, most likely, will be a losing season for the team, the Football Club has scored one huge success in their first season – they’ve captured lightning in a bottle in the form of a fan base. There have been “no tickets available” for games played in the deep chill of a Toronto spring evening, and one in an almost monsoon-like downpour. You don’t ‘manage’ that kind of fervent interest with a couple of rabid supporters clubs and a bit of free swag. For those of us who sat for years at tired old Varsity Stadium and watched the Toronto Lynx mostly lose, the winless first four games for Toronto FC had a familiar flavour to them, and yet the experience of those games was wholly different.

This past week’s friendly against Aston Villa gives both an example of, and an explanation for what the FC have managed with fans where all other Toronto soccer has failed in the last 30 years. In a meaningless exhibition game, in which the Toronto team fell two goals behind within 19 minutes of play, the crowd and its noise continued to grow as the game progressed. Anyone who follows soccer knows that a 2-0 deficit, while far from an impossible hole to climb from, is a tall order, especially against a team from a higher division (in the case, a higher league).

I watched the Aston Villa game from the FC press deck, a fancied-up camera perch at the very top of the west stands. The deck provides the absolute best view of the pitch, and also a superior overview of all of the stands. From that angle, you can’t miss the story of Toronto FC’s fans. The crowd was sprinkled with Aston Villa jerseys, and as these fans danced and celebrated each of their team’s goals, one TFC fan song grew in prominence. “This is our house!” “This is our house!” The chant burst out of the stadium and drifted out over the Toronto lakefront. From where I stood I could see people walking through the exhibition grounds outside the stadium turn and look back, wondering what was up.

I’ve been to Toronto Maple Leaf hockey games when the “Go Leafs Go” chant starts up, and to Blue Jays baseball games for “Go Jays Go.” Those are classic fan moments, the experience of an entire arena or stadium getting behind a team, singing out a demand that the players find their pride and get back in the game. The delirious madness of crowds thinking they can have some positive effect on play. But “This is our house!” is a qualitatively different chant. It’s not about the players on the pitch; it’s about the fans themselves. Players come and go, opponents come and go; even beloved coaches and stadiums come and go. The only consistency in pro sports is the audience, the fan-base. The actual number of fans may fluctuate with the wins and losses --- there are bandwagon jumpers in every sport – but a team without some kind of core audience is not a team.

“This is our house!” can spur a team to come back, and it did this week. If only briefly, Toronto tied the game just before the 62nd minute on a scrambly little goal by home-town favorite Andrea Lombardo, who had come in as a late substitution for Danny Dichio. Friendlies are, by definition, meaningless games in a points-based soccer season, which means that Lombardo’s tying goal was, technically, pointless. Tell that to the 20,000 screaming, jumping, stomping fans who celebrated the goal. Tell it to the coach, Mo Johnston, who leaned out into the pitch like delirious fan to give Lombardo a high five as he ran past, mobbed by teammates.

Aston Villa went ahead for good about twenty minutes later on a goal by Norwegian-born striker John Carew. After his goal, Carew grabbed the ball from the back of the Toronto net and carried it upfield toward the centre spot. He held the ball above his head and slapped it with one hand, taunting the Toronto crowd for their premature fervour in celebrating what could have been a well-earned tie. The boos rained down on him, and suddenly Toronto-boy Andrea Lombardo sprinted at Carew and knocked the ball from his hands. Lombardo shouted into Carew's face, giving him an earful for showing up the Toronto crowd.

Try that crap back in England, buddy. This is our house.
Posted by John at 9:51 AM

I so wish I'd been in town for that game. Love that Carew, despite any bad behavior here. And I woulda cheered for the hometown lads, promise. Not their bank.