battling the bafflegab - Canada's universities excuse themselves from copyright 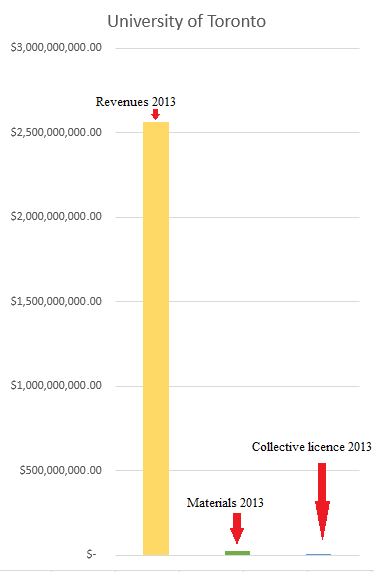 U of T's revenues in 2013: $2.5 billion
What they claim to spend on materials: $27 million
What they're refusing to pay writers through collective licensing: approx. $1.8 million

On December 11, the Universities of Toronto and Western Ontario both decided not to renew a collective licence agreement that sees writers and publishers fairly paid when copies of our work are made and used in course packs. U of T and UWO join York University, the University of British Columbia and a number of other large Canadian post-secondary institutions in unilaterally ending a twenty year relationship of mutual respect and support between the post-secondary community and Canada's writers and publishers.

Needless to say this development, coming just before the holidays and after Canada's writers received copyright royalty cheques worth roughly half what they were last year, became a focus of concern for The Writers' Union of Canada (TWUC)*, which immediately sent out a call to action, inviting members to write directly to U of T and Western leadership**.

Many TWUC members have now written notes to U of T and Western, and those who contacted the respective presidents received boilerplate responses explaining the universities' positions. As I am receiving many questions from writers about these response letters, I thought I would save everyone a bit of time and deconstruct the arguments here so we can all see the core of the issue, which is:

In published copyright guidelines, U of T, Western, UBC, York and many other schools are claiming they now have the right to copy up to 10% of a published work, entire chapters, entire stories, etc., without seeking permission or paying royalties. This claim is, I believe, designed to eliminate collective licensing, which for twenty years has given broad permission for exactly this amount of photocopying while fairly compensating authors and publishers. The elimination of collective licensing will remove tens of millions of dollars per year from Canada's writing and publishing sector.

I'll use a bit of each response letter in this exercise.


“The Justices of the Supreme Court have provided guidance on limits of fair usage and Western will be following their interpretation.”

This sounds impressively law-abiding, but in fact Western’s copyright guidelines have nothing to do with any Supreme Court guidance on limits. Nowhere has the Supreme Court allowed for copying of 10% of a work, entire chapters, entire stories, etc., which is the explicit claim made in UWO's copyright instructions to teachers and students. In fact, Western claims that copying more than 10% of a work may be considered fair dealing.


“As well, Western already spends millions of dollars annually purchasing usage licenses from publishers for a large proportion of the materials available through our libraries.”

Similarly, from U of T's response letter:


"We share your goal of supporting writers and scholars here at the University and beyond. In fact, the University spends over $27 million annually on Library acquisitions, including licensed material and electronic resources, and also supports scholarly publishing through the University of Toronto Press."

These are big numbers. Of course, educational institutions that collect billions in tuition and student fees should spend millions on materials for those students, but that is beside the point. Library acquisitions, direct usage licences, electronic resources and scholarly publishing are all part of the larger mix of the academic usage economy... and so too is collective licensing for course pack production. Paying for some of these things does not buy permission to NOT pay for the rest. To suggest otherwise is like saying "I spend a lot on groceries for nine months of the year, so for the last three months I'll just take food from the store, thanks."

A side note, but not unrelated (since these universities continue to loudly tout their materials budgets), U of T and Western, like UBC and York measure their annual revenues in the billions - billions with a "b." According to U of T's 2013 financial statements, that school had revenues of $2.5 billion last year, and realized a surplus of revenue over expenses of more than $173 million. Given those huge numbers, it is confusing in the extreme that U of T would balk at a legally required royalty payment of 1% of their annual surplus. I did a full analysis of UBC's finances vis a vis collective licensing in an earlier blog post. I think we can assume all of the big four universities are in similar extraordinarily comfortable positions.


“The University is providing a combination of education, information resources and services designed to ensure that members of the Western community are copyright literate and can make informed decisions when using the published work of others in research and teaching."

This, I think, is where all of these universities are really playing with fire. With copyright guidelines advising the copying of a full 10% of a work into course packs and digital repositories, these schools are exposing their faculty and students to a very real risk of legal action. Because of similar guidelines and usage patterns, York University is right now being sued by Canada's copyright licensing agency, and individual faculty have been named in the lawsuit.

If you have written to a university about this issue and received  a boilerplate response, feel free to refer to my notes here for further engagement. If you haven't yet written a note about this organized royalty grab, please do so with the links below.


* I am employed by The Writers' Union of Canada as executive director.

The Writers' Union of Canada has compiled a list of currently licensed colleges and universities. Those schools not on this list have decided to forgo collective licensing.
Posted by John at 3:56 PM