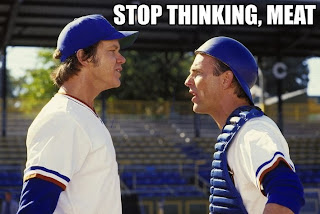 The Authors Guild (America's version of The Writers' Union of Canada), is proving itself, once again, to be the best friend of writers worldwide as it continues its David and Goliath legal fight with all-seeing search giant Google.

This week, the Guild filed its Memorandum of Law in Opposition to Google's Motion for Summary Judgment in the US District Court, Southern District of New York. You can read the filing (a redacted version) at this link.

Highlights include the application of logic and common sense to Google's claims of transformative fair use:


...the only thing “transformative” about Google’s display of snippets of in-print books is that it transforms online browsers of book retailers to online users of Google’s search engine. Google “transforms” Amazon customers into Google ad-clickers.

Plus a rather obvious refutation of the idea that this massive book scanning project has no impact on the market:


Google’s Library Project bestows on university libraries digital copies that they otherwise would have to pay for.

As one of the named plaintiffs in the ongoing lawsuit, famed knuckleballer and author of Ball Four, Jim Bouton is used again and again as an example in the Guild's filing. The Guild notes that simply by using strategic search terms in relation to the digital copy of  Bouton's book in Google's brain - "fastball, curveball, spitball, slider, walk, Mickey Mantle" - a searcher would find multiple "snippets" of verbatim text, allowing the "reader to find out everything Mr. Bouton had to say [on the searched topics] without buying the book." The Guild concludes:


The reality is that Google makes available approximately 78% of the verbatim text of each book.

Here in Canada, we have K-12 school boards, colleges and universities claiming that up to 10% of a work (entire chapters, entire stories, etc.) can be copied and used without permission under a claim of fair dealing. Meanwhile, Google looks to expand that disputed free territory even further.

But what about that benefit to humanity argument we keep hearing from those pushing these unfair expansions of fair use and fair dealing?


Google cannot hide its commercial purpose by pointing to possible benefits to hypothetical end users. Almost any act of copyright infringement likely benefits someone, but it is Google’s use—not the use of hypothetical end users—that must be analyzed... Google indisputably used the books to enhance the value of its search engine, gain an advantage over its competitors and generate even greater advertising revenues.

One would think anyone could detect the blatant unfairness of such massive amounts of copying. Sadly, authors have spent an awful lot of time shaking our heads in disbelief at some of the recent court rulings against our established rights, mostly because those who would use our work to sell their own services have been lobbing that weak, wobbly benefit to humanity stuff at the courts. And as Jim Bouton well knows... you may be 100% sure the knuckleball is coming at you as the very next pitch, but that don't mean you're going to hit it out of the park.