"Al Purdy peed on my car," or, conversation does not always start well 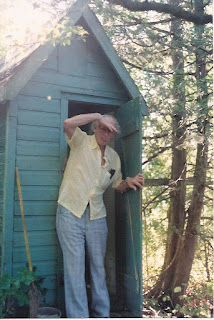 Two evenings ago, I was enjoying the Al Purdy Show at Toronto's Koerner Hall. This was a fundraiser organized by the Al Purdy A-Frame Association, a volunteer organization trying to raise about $1 million to complete the purchase and renovation of poet Al Purdy's old A-Frame cabin in Ameliasburg, Ontario, and establish it as the permanent site of a writing retreat centre, complete with programming in local libraries and schools.

Quick background:
I've been informally involved with, and a passionate supporter of the Purdy Association for the 5 years since it was founded by Jean Baird. I hosted a much smaller-scale fundraiser at Harbourfront a number of years back. Purdy's work means a great deal to me, as I published several of his later poems in ink magazine in the 90's, and carried on a treasured correspondence with the old fellow.

The show included an interview with Margaret Atwood in which she talked about the time Al took a pee on her car by way of making an argumentative point - "It was just pee," she said. "The rain washed it off."

Can't I get one evening off?

As I watched, I also kept an eye on Twitter where my own (virtual) car was taking a (virtual) soaking. My blog posting about a recent library resolution against collective licensing through Access Copyright had riled up some folks, and they were stepping to me on the interwebs. I won't get into identities, but I will say most of them appeared to be librarians, and I'm not sure how to register my extreme disappointment at the name-calling and scorn to which I was subjected. On the other hand, I've been called worse, so on we go.

I think I have a good handle on why these twitter-folks were angry with me. My posting made an explicit link between the recent over-expansion of fair dealing claims by the educational (and library) sector, and authors not being paid for their work. In other words, I made it look like librarians don't support authors.

So... here's the thing. I'm having a lot of trouble seeing it any other way, and since I didn't just pass a resolution attacking libraries, I'm not really sure it's my job to explain any of this further.

The image above shows how licensed, fair dealing and purchased uses of copyright protected works exist on a spectrum. You can copy a little bit free because of fair dealing - that's how we quote and use short passages as examples. You can copy more, and do not have to buy a full text if (and only if) you buy a license to do so. Once you start copying substantially (up to the full text), you really need to buy the book.

Licensing, which I've noted is worth close to $8 million to the writing sector in Canada (2011 figures - real money) covers the territory between where fair dealing ends and the need to buy a full text begins. Licensing has NOTHING to do with fair dealing and sits nowhere at all on that same territory. To believe that licensing steps on fair dealing is to misread C-11, recent Supreme Court of Canada decisions and the basic concept of copyright. As well, licensing is not intended to make the lives of librarians and teachers more difficult. It is designed to provide maximum permission across the spectrum - to make things easier.

This next image is what happens when the definition of fair dealing is expanded to remove the need for licensing. Now, let's be clear - this has NOT actually happened in Canada according to actual law. It is simply what many school administrations, and resolutions like the one passed by OLITA are either mistakenly assuming has happened, or cynically trying to make happen through the establishment of a new common practice. I am very happy to believe that the OLITA resolution is the result of a mistake, but that doesn't change its outcome.

When you advocate for the expanded fair dealing model above (and the current attack on Access Copyright does just that), you are advocating to remove millions of dollars of annual income from Canadian writers. It took the Canadian writing community over 5 years to even come close to raising enough money to establish a fabulous new resource for our shared culture. The removal of collective licensing means the Al Purdy Show ends up at a net loss of about $7 million. One step forward, seven steps back and with pee all over our car. Delightful.

As well, let's keep freedom, access and the relative poverty of students out of this, please. Licensing is about providing more access, not less; more freedom, not less. Nowhere do writers or our licensing agency demand that students pay the licenses (the schools sign the licenses, the schools should pay them). Does anyone actually believe the removal of collective licensing fees will reverse tuition's rising trend or increase library budgets? All it will do is impoverish the cultural sector - a lose/lose for everyone.

Again, that second image is NOT the new reality for anyone in Canada, not for teachers, students, librarians, writers or publishers. When the fair dealing arrow crosses into licensing territory, that is copyright infringement. Anyone assuming that fair dealing now looks like the above risks real liability, personally and professionally.  If school administrations, library associations and teacher associations have not explained this to their members and staff, one really has to ask why not.

- from "At the Quinte Hotel", rooms for rent in the outer planets: al purdy, selected poems 1962-1996 (Harbour Publishing)