This week is Fair Employment Week, during which the Canadian Association of University Teachers (CAUT) wants to draw your attention to the plight of adjunct and sessional professors, who are poorly paid for their work. 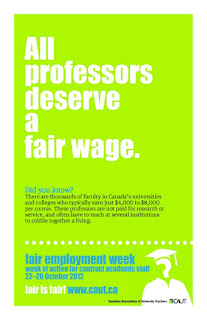 I totally support this cause. Our educators should be well paid. As should the writers and publishers who produce the content that is used by our educators in their jobs.

One small problem. CAUT spent lots of time, energy and money lobbying against the rights of Canadian writers and publishers during the decade-long copyright reform process in Canada. Their efforts resulted in a theoretical expansion of copyright exceptions that will now take another decade to work its way through the courts, costing Canadian writers and publishers tens of millions of dollars (per year) and reducing tuition, and raising faculty salaries by... well, who knows?

Almost certainly, by nothing.

Thanks CAUT. I support your cause, as do almost all of the writers and publishers whose rights you helped to weaken.

We're ready to talk when you are.