Alright, book-loving peoples. Do you feel that chill in the air? That is the refreshing, brain-cleansing breeze that brings with it the new fall books. Mmmmmm, they smell like fallen leaves and cider.

The Book Room is back, with Canadian poet, novelist, short story writer, blogger, list-maker, writing instructor, editor, aaaand readings hoster, Stuart Ross. As we discuss a little bit in the interview, I really don't know how long it's been that Stu has been in my consciousness. It seems to me like he's sort of just always been there, from the very first day I decided to take books seriously.

Stuart edits his own imprint, a stuart ross book, at Toronto's Mansfield Press, and his many, many books are like a tour of Canada's better literary presses. A regular at Toronto literary events, Stuart has recently taken his talents to Cobourg, Ontario where he occasionally feels a bit isolated but enjoys the fresh air and apples.

We talk about his beginnings as a writer and street-pusher of literature, his near-obsessive love for Kim Novak, his abiding nostalgia, and his first (solo) novel. 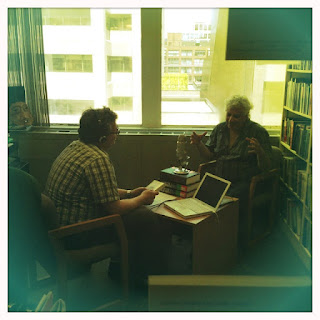 Here's that list of Stuart's books that I could not manage to come up with in the podcast:

Henry Kafka and Other Stories (The Mercury Press, 1997)

Surreal Estate: 13 Canadian Poets Under the Influence (The Mercury Press, 2004)

Snowball, Dragonfly, Jew (ECW Press, 2011) - this is the one we discuss in the podcast!

Having now compiled this list, in full daylight, with a working Internet, let me apologize to Mercury Press for not crediting them on Surreal Estate, and to Stu for a slight retitling of his latest work. It was dark, my eyes are old.


(photo of Stuart Ross chatting with me in the Book Room courtesy my brilliant songwriting colleague, Aengus Finnan)