Last evening, I participated in a very civil debate on copyright reform and Bill C-32, hosted by the Canadian Conference of the Arts as part of their new Thinking Culture series. It took place, believe it or not, on the campus of the University of Ottawa, also known as the self-appointed centre of Canada's free culture movement. Believe me, when I was invited to speak at U of O, I fully expected the room to be weighted heavily with folks who wanted to challenge and dismiss everything I had to say in defence of creator rights around the new fair dealing category for education. I mean, Michael Geist's office is steps from the building where the debate took place.

Here's a photo of the debate room, taken from the panel table well before the event (the room did eventually fill). I love this shot because here we are debating the merits and flaws of a government bill, and there's the government just a couple of blocks away, doing exactly the same. Yay democracy! 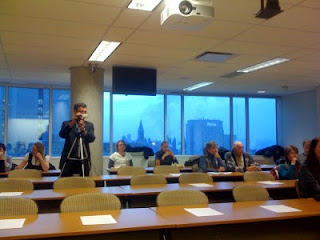 .. and for the most part it was a a fun and interesting talk with very little (if any) acrimony, although Aidan O'Neill did mention my mother at one point and there could have been a throw down.

I focused my talk on the strange campaign to add "education" as a fair dealing category based on the costs it would save for Canada's overburdened post-secondary students. I brought some hand-drawn charts with me (coloured by my own little students -- my kids in grade three), showing that the actual numbers represent a minuscule extra charge per student when compared to the rest of the expense lines in their budget. The charts also showed that universities need not pass copyright licensing costs on to their students, since they represent an even tinier portion of their yearly budgets.

For me, the highlight of the evening was Roanie Levy putting into words what I have been thinking for many years. It seems some of the more extreme advocates on the user side are trying a little sleight of hand in which they insert new freedoms into C-32 under the umbrella of a very benign-sounding fair dealing in order to finally get what Canada's courts and copyright board have consistently denied them... the freedom to broadly interpret what happens in the classroom as almost entirely fair dealing. I'm pretty sure I didn't hear a strong denial on that point from either Aidan O'Neill or Spencer Keys (not that they themselves are sneaky advocates, but they were in the unenviable position of having to answer for some of the more extreme rhetoric on the user side).

All in all, a very positive evening. I finished up my own long day of arts work with a visit to the Tree Reading Series, which featured excellent readings by Dean Steadman and Canada's latest Parliamentary Poet Laureate, Pierre Desruisseaux (as well as a marvelous translation reading of some of Desruisseaux's work by a University of Ottawa grad student studying him). Then it was on to a local watering hole where I was hosted by some of the city's most exciting and interesting poets -- Tree organizer Rod Peterson, Pearl Pirie, the everpresent rob mclennan, sound poet Max Middle and new acquaintances Sandra Ridley and Christine McNair. There was one other fellow there, but I'm sorry to say I have totally blanked on his name (help me out rob).

The rest of the Tree line-up for the winter and spring is excellent, so anyone passing through (or living in) Ottawa on a Tuesday evening should check them out at the Arts Court at 2 Daly Avenue. Max Middle's AB Series is also well worth a visit. Ottawa is poetry-hot right now.
Posted by John at 3:22 PM

Wow, typos galore - sorry about that folks. I was rushing to finish on Porter's free Macs beforemy flight back to Toronto. I'll fix them when I'm next at a computer.

And Pearl, sorry I forgot to mention you in the after reading crowd. I've corrected that.

That's great John. Nice to see civil and productive public discourse is possible on this topic after all. It takes many different voices and views to develop workable solutions, especially on issues that effect so many different groups.

Hi John,
I'm on the train from heathrow to central London. I plan to visit the British museum and the national gallery while I'm here for 3 days. Do you have any other suggestions for artistic sights I should try to see?

It was indeed civil and productive. Of course, as I mention in the post, the free culture crowd did not come out.

It's interesting to me that when there will be actual professional artists in the room -- whose livelihoods depend on strong copyright protection -- the theorists and lecturers decline.

As to London, all you have to do is get off the tube at Charing Cross or Monument, and take a deep breath. Particles of English literature hang about in the air.

You'll also find Isaac Newton there and Charles Darwin. If you're a fan of the DaVinci Code, you'll know that the grave of Newton holds special significance in solving the central riddle of that plot.

If you're into architecture and not afraid of heights, try out St. Paul's cathedral and the whispering dome.

Now I'm all jealous. I'm driving to London, Ontario this afternoon. Not quite the same.

"It was indeed civil and productive. Of course, as I mention in the post, the free culture crowd did not come out."

Of course when you get a group of people together who are all in basic agreement it is quite probably that the discussion will remain civil. Of course it is also highly unlikely that what transpires could pass for 'debate' either. Certainly not a very deep one.


WRT your dead writer list, I do not know about the others, but neither Coleridge, nor Wordsworth are in Westminster. Wordsworth is buried together with his sister Dorthy in a beautiful little cemetery in the village of Grasmere, which is in the English Lake District. There is a museum there dedicated to Wordsworth, and if you can manage it, it is a wonderful place to visit. I've spent a lot of time there over the years, Last time I was there they had a great display dedicated to Coleridge. The hiking in the mountains is wonderful also, but you might want to wait 'till spring when the weather is nicer for that.

Coleridge, I believe is in London, but not Westminster. I'd have to look that one up though to know where.

Praise be... Darryl has made a factually correct statement on this blog.

Many writers are buried in the Abbey, and many are just memorialized there. You may have to go elsewhere to get near the actual bones of some of them, but for one-stop shopping of dead Brit scribblers you can't beat the Abbey.

About the debate -- the user side was well-represented by Aidan O'Neill and Spencer Keys. There was plenty of disagreement. As I said, the missing element was the free culture crowd who, I guess, don't bother to speak up (or even show up) when they can't absolutely control the message. Reminds me of a town hall I once heard about.

Yeah, sorry John. I know your a fiction writer and all, and you usually do a pretty good job of that right here on your blog. I hope 'factually correct statements' aren't too much of a problem for you.

I'm about to head off for a winter camp with the scouts on the weekend. I'll see if I can work in a few words about copyright just for you.

Thank you for your suggestions John & Daryl. I visited the national gallery yesterday. Today is the British museum and tomorrow Westminster Abbey.

This was my favorite painting at the gallery yesterday.

It's actual size is 6*8 Feet (the jpg at the link does not due it justice). I like the way you can see the emotions in each of the subjects. I also was impressed with Van Gough's pieces, he uses a lot of raised tecture which you are not aware of by looking at photos of his work. Picasso continues to not impress me though.

Back to the topic of the post. John I wonder if you could define your use of the term 'free culture crowd'. Are you referring to those who wish publish using creative commons or rather those who don't want to pay for anything at all, or something else entirely?

It would be useful in our discussions to have more specificity.

strange .. well do a Google search the piece is called "An experiment on a bird in an air pump by Joseph Wright of Derby 1768".

I have one point to share on behalf of freelance creators who live by their copyrights:

Internet Service Providers in Canada have refused to participate in any meaningful way in helping us receive compensation or prevent the illegal downloading and copying of our works. The Harper government has drafted a copyright reform bill that explicitly lets ISPs off the hook in this regard and the Conservative spokespeople defending this position explain the bill is giving ISPs what they need...no responsibility.

Point two, on behalf of freelance creators as consumers and citizens:

Now a regulatory agency is giving ISPs the right to squeeze more money out of their customers, especially those who depend on greater bandwidth to conduct their lives, such as professional freelance creators. So professional freelance creators are being treated as fodder for ISPs from two directions. As consumers and, more importantly in my mind as citizens, we should make an appeal to cabinet to send this decision back to the commission for reconsideration. There is plenty of precedent for such action by cabinet. The combination of their policy direction on intellectual property protection and the regulation of the privately owned information pipelines does not seem to be in the public interest.

You’d almost think the current government’s vision of the “digital economy” they’ve been touting is only about squeezing money from us to watch movies online and enriching the ISP shareholders. When you consider that Canadian ISPs are vertically integrated with media companies that also own and control newspapers and private broadcasting among other information products...one can see how conspiract theories relating to crony capitalism might develop in the general population...

Oh, sorry Crockett. Didn't see your question in all that.

The free culture crowd to which I refer is the vocal minority standing behind professor Michael Geist's highly politicized advocacy on copyright. Considering the debate was on the University of Ottawa campus, mere steps from the master's office, one might reasonably expect that someone would show up to instruct us artists on our wrongness.

I continue to find it very interesting that no-one did show up. As a soccer fan I can tell you... no-one walks into my house without hearing from me.