As the bill is debated and possibly amended over the next little while, I may have a thing or two to say about what's in it. In the meantime, I invite you to check out IP lawyer James Gannon's analysis of the DRM worries surrounding this new bill. In the same vein, IP lawyer Barry Sookman has a summary analysis of the bill itself.

As well, it might be a good time to remind ourselves why we have copyright. As this series of films from the Canadian Film Centre suggests, we have copyright to respect and protect work... the work of artists. My favorite is the third film Respect the Original. A man arrives at work to find he's been replaced by a copy of himself, downloaded for free from the Internet. Not only is this lovely little Kafka-esque scenario almost exactly what it feels like to have one's work suddenly devalued to nothing, but the film also shows the second shoe dropping -- value the copy over the original, and see how many originals get made. Funny, poignant, thought-provoking. 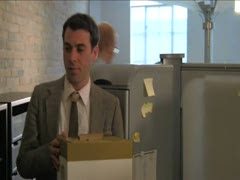 "As well, it might be a good time to [ask] ourselves why we have copyright."

There! Fixed that for you.

While it is true, that Berne may tend to agree with you that "we have copyright to respect and protect work... the work of artists" The Americans, (who are are now Berne signatories) are quite explicit in the copyright exists "To promote the Progress of Science and useful Arts" (even though their current behaviour is not consistent) which, I'm sure you'll agree, is quite a different goal from the one you mention.

I like the video you mention as well. In particular I like its closing remark "Without your support they'll disappear", and the video illustrates quite well the problem we face when mass copying becomes so very easy for everyone.

The problem with your view of copyright as an inherent right and necessary respect for authors is that it potentially brings it into conflict with other rights of other people. With our cheap technology for quick and easy duplication, consumers, educators, other creators, and just about everybody, has to then give up privacy and real property rights in order to meet the obligation of delivering these perceived rights to copyright holders.


If on the other hand, copyright was merely a utilitarian means to an end, that of maximizing creative output, then we could acknowledge the aspects of traditional copyright that no longer function well due to technology changes, and make a serious effort into looking for new social systems that could be used to compensate for these new deficiencies, and create new supports.


Yours, and most of the industries' as well as governments' views of copyright are built on an assumed premise regarding the purpose of copyright. The premise is assumed because it has been convenient to do so, and until now it has not been in strong conflict with anything else we value. Now it does, and that conflict is evident in the controversy of the DRM protection in this Bill.

Before we can relieve this conflict we must engage in a discussion as to why we have copyright in the first place. How about a royal commission on copyright? Even if it were to conclude that your premise is correct, the exercise would go a long way toward calming consumers. At least then they'd have some idea of exactly why they should have to sacrifice some freedoms and rights of their own.

Thank you for your comments.

I wish you the best of luck in advancing your theories about creativity, the economy, the rights of others and society in general.

As you know, Industry Minister Tony Clement takes questions directly on Twitter. You should send him some of this stuff.

Since I already discussed James Gannon's selective reading of the bill and history in the comments on your previous blogpost, I won't bore you with that again. People interested can find it there.

It's true that there are a few exceptions within C-32 to the anti-circumvention clause, but that still leaves a lot of situations where TPM/DRM trumps law. If, as you claim, we have nothing to worry about TPM/DRM, we can simply replace a large amount of the clauses in C-32 with the simple clauses stating that circumvention for the purpose of copyright infringement, and tools with the sole purpose of committing copyright infringement are illegal. This would remove practically all objections that people like me have with anti-circumvention clauses, and would still be in accordance with the WIPO agreement.

Btw, discussions would be a lot easier if people learned the difference between TPM and DRM. :)