(this is not actually the 75th anniversary issue, but they didn't have a shot of it on their site)

Quill & Quire, Canada's periodical about the book trade, has just sent their 75th Anniversary issue out to subscribers (of which I am one and so that's how I know). Q&Q spends some time looking back and looking forward in this issue, and while the future for book writing, publishing and selling can look a little grim from certain angles, this issue is not a print memorial service.

Cautious optimism is the theme, and nowhere is it better expressed than in Richard Bachmann's reflections on his thirty-plus years behind the counter as a bookseller, most of that time spent running A Different Drummer Books in Burlington, Ontario. Some quotes of note:

"Having a multitude of un-vetted book blogs is not quite the same thing as real discourse. Though the world has indeed become connected, it has also become exceedingly more diffuse. By its nature, the Internet is pluralistic but unfocused, inclusive but uncritical. In Texan parlance, it's a mile wide and an inch deep."

"I've come to think of bookselling as applied idealism."

"... Despite my concerns, I do not believe booksellers are blacksmiths; my colleagues needn't yet enroll as exhibits in a heritage museum."

This is a welcome dose of realism from someone who has spent enough time on the front lines of culture to know what he's talking about. It's just too bad he is out of the business end of things -- at least as a seller.

And speaking of books and the future, many, many people keep recommending Jaron Lanier's You Are Not a Gadget to me, I suppose because I have been public in my concerns about how cultural industries and the Internet come together. 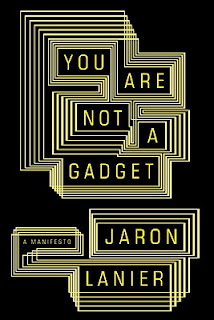 Lanier is a unique being, a self-described weirdo in fact -- credited with coining the term "virtual reality," and one of a relatively small circle of brilliant thinkers behind most of what we experience as the Internet today. But unlike most of his friends in Silicon Valley, Lanier does not subscribe to what he calls the "kooky ideas" about how the online experience will revolutionize culture.

I will give in and get the book, but for a fascinating preview and summary of his ideas, have a look or listen at this audio/video podcast of a recent talk he gave in support of the book (warning - he plays some pretty funky music off the top):

Staying Human in a Tech-Driven World

UPDATE: Here's an audio interview with Lanier, which is a bit more word- and writing-focused -- though in the first link, he does insist the World Wide Web was originally imagined by E.M. Forster.