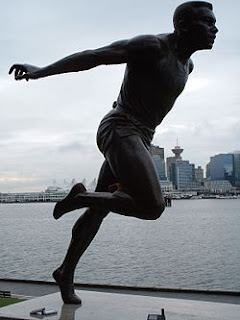 Each year the Black Business and Professional Association gives away both awards and scholarships in the name of Harry Jerome, one of Canada's greatest track athletes, star of many Olympic and Commonwealth games and, after setting four different world records for the 100 metres, the fastest man on earth in his era. Jerome helped to transform the sport of track by introducing the practice of weight training for track athletes and his personal story is both inspiring and tragic. Jerome died suddenly in 1982 at the age of 42.

The Harry Jerome Awards are in place to recognize and honour excellence in African Canadian achievement, while the scholarships provide financial support to African Canadian youth pursuing higher education. Awards are given away in a number of categories including Arts, Academics, Athletics, Community Service, Entertainment and Media. Nominations for the awards have been extended to January 30th this year.

Okay, Ontario literary community, you are hereby challenged to pick a winner. You'll find the nomination forms here.
Posted by John at 9:19 AM