Joseph Boyden wins the Scotiabank Giller Prize for his novel Through Black Spruce.

Here's a quote about the win, from today's Globe and Mail:

In an interview after his win, Mr. Boyden said, "What I'm most excited by is being allowed to give voice to a segment of the first nations population that I'm so impassioned by and so in love with and so a part of."

He indicated some of the prize money might be put toward "a fellowship for young students in Moose Factory and the Georgian Bay area, native students, to help them get into university."

Mr. Boyden divides his time between New Orleans and Northern Ontario. Through Black Spruce splits its narrative between two settings — the rugged wilderness of Northern Ontario, near James Bay, and the ecstasy-fuelled modelling world of contemporary Manhattan. The book has two alternating narrators — Will Bird, a Cree bush pilot (and the grandson of Xavier Bird, introduced in Three Day Road) who's in a coma in a hospital in Moose Factory after being pummelled by drug dealers, and Bird's niece, Annie, who until recently has been searching for her missing sister, Suzanne, a model in New York. 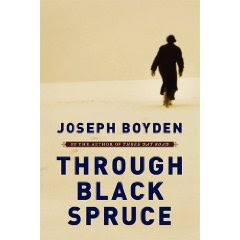 (image courtesy Penguin Books)
Posted by John at 11:52 AM

Yeah, sure, congrats to Joseph Boyden, of course.

But no mention of Quill and Quire's Books of the Year for 2008?

(no, I have no personal vested interest in this at all ;)

Shameless self-promotion is encouraged on this blog. Everybody gets one.