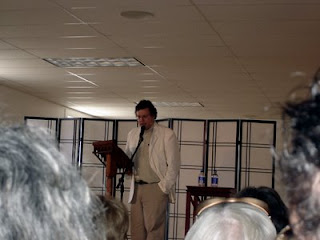 (Testing out the Samuel Clemens jacket in Picton, Ontario. Photo by Julia Colyar -- thank you)

T'is the season for summer literary festivals, and kicking off the season this past weekend was the Prince Edward County Authors Festival (PECAF), the resurrected version of a reading series that went into hiatus about four years ago. It was a one day festival of the published word, on the very first day of summer. PECAF is back thanks to Artistic Director David Sweet and the dedicated folks at Books & Company, Picton's exquisite book shop right on Main Street -- book lovers whipping along the 401 between Toronto and Montreal (or Ottawa) would do themselves a favour by taking a little detour through the County to check out Books & Company (Trenton or Belleville exits, take your pick). Books & Company is a rare bird in the book trade, stocking brand new and used books side by each on the many, many shelves lining its five thousand square feet of retail space.

I served on an author panel on Saturday morning, discussing the writing life with local (and hilarious) scribbler Michael Riordon and fellow Torontonian Shari Lapeña. The panel was hosted by one of my favorite writers of my own generation, Marnie Woodrow. Not that long ago, I remember wondering where Marnie had gone, having not seen her around the Toronto lit-scene for a good many years now. It was such a treat to see her name in my inbox, inviting me to come read in the County. Turns out, she toils the grape vines for one of the County's many new wineries, and continues to write and edit. In other words, she's doing what I should be doing, and as a result I'm beside myself with envy.

There was a terrific crowd for the panel, and the readings throughout the day. I read in the "fiction" slot with Shari and Zoe Wittall between 1 and 3 p.m. I led off with some poetry, and tested out my new Mark Twain white linen jacket (bought for me in Philly by painter/sculptor dude James Walke). Both the poems and jacket seemed to go over well.

The evening was devoted to Paul Quarrington, he of King Leary (the recent Canada Reads winner). Paul read from his new novel, The Ravine, and then pulled out his guitar, running through a short set of songs from his band the Pork Belly Futures, including everyone's favorite literary blues, Fictional World, featuring the lyric Michael Ondaatje has stolen my girl.

Good times -- a beautiful day, terrific hosts, great readings and music, and a wine tasting to end off the night. Let me now apologize to Quarrington and his buddy Gare Joyce. We really did mean to come out for one more drink but, you know, there was the hotel balcony, and a bottle of wine, and the soft summer air.

Bill C-61 sidenote -- I bought both PBF cds off Quarrington for $30, handing the cash directly to him. I then loaded both discs to my iPod, where I have been enjoying them ever since. I understand I should be panicking about how American-style legislation is threatening my right to do all that, but I just can't work myself up to it. Perhaps I should read more comic books.