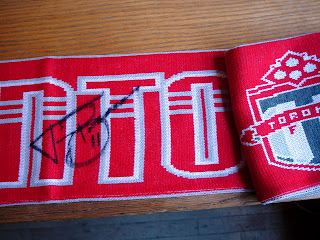 I'm still working away on the book about Toronto FC, Canada's only pro-football club. This morning I was down at a sunny and warm BMO Field to watch the latest practice, and then to interview the Toronto captain, Jim Brennan, and soccer journalist and broadcaster, Gerry Dobson.

The crazy thing for me working on this book is that, since I'm selling it as a fan memoir of season one, I approach these interviews less as a journalist and more as someone unreasonably interested in the game. Having interviewed and/or read with quite a number of my literary heroes, I've managed to outgrow being star-struck in the book world -- a painfully uncomfortable conversation with Richard Ford was all it really took -- but these are pro athletes I'm dealing with now. Not really my world. I can't admire these guys in the same communal way I do other writers, because there is simply no chance of me ever doing what they do. I can't really sit in my season seat at BMO and think -- yeah, I like the way Brennan handled that back pass. I should give that a try the next time I'm in the same circumstance. I will never be in the same circumstance.

Even as I'm asking my questions and taking mental note of how well this or that response will work in this or that chapter, I'm also sort of eyeing the bench and thinking Jesus, that's Danny Dichio sitting right there. They sing songs about that guy. And maybe that's part of the problem. Huge crowds of people so rarely sing songs about writers these days.

And so it was with Brennan -- a guy ten years my junior who nevertheless makes me feel like I should be addressing him as Sir. Why? Because, as a season-seat holder, I'm a member of the club. Brennan's not just the captain; he's my captain. He's also an ironman -- playing with cracked ribs, a broken wrist and various foot complaints, the guy hasn't missed a minute of play all season. Me, I quit writing for the day if I get a hangnail.

At the end of our interview, I asked Brennan to sign a scarf for me, and he kindly obliged. The scarf is being sent to George Murray (the bookninja) in St. John's, Newfoundland, and he will be donating it to The Duke of Duckworth pub, where it will hang in a place of honour over the bar. And tomorrow, when the boys score against Columbus to end their drought, I expect everyone in that pub to be cheering. 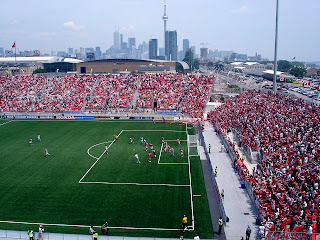