called to the castle 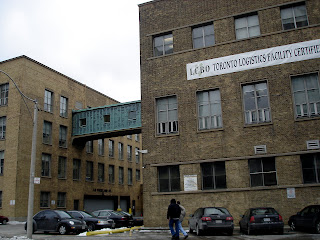 I’m at the Liquor Control Board of Ontario’s head office to get an advance taste of Le Clos Jordanne Pinot Noirs and Chardonnay. Le Clos Jordanne is a Niagara cooperative effort between Canadian firm Vincor and the Burgundy house Boisset, and they are getting set to release their 2004s, the first commercial release of wines from this experiment in true Burgundy-style wine making in Canada. The release is in March.

A frigid, windblown walk from the streetcar brings me to the LCBO’s industrial gothic pile by the lake, and after signing in (twice), I’m escorted to a tasting room by Vintages catalogue writer David Churchill, an easy-going, inviting guy whose ‘office job’ is to taste and assess some of the world’s best wines and liquors. He seems happy.

The third floor of the LCBO head office is as bureaucratic and corporate an atmosphere as you’ll find in bureaucratic and corporate Toronto. After all, the LCBO is the world’s largest wholesale purchaser of alcohol – a huge, multi-billion dollar business, with all that entails. Security guards, glass doors, quiet corridors, warren rows of office cubicles with the occasional cluster of low-talking co-workers huddled together for human comfort. I remember my corporate writing days at Sun Life Financial. I try to memorize the way out, but quickly lose my way.

David leads me through a white door into a starkly lit small white room that smells like the plastic bucket I’ve been making homekit wine in for the last few years. Sour and airless. Everything is white or silver. There are several sinks and plenty of instructive posters on the wall. It’s high school science class all over again, only with booze. There’s a few other tasters there already, kibitzing and laughing, their noses never far from a glass. Stainless steel spit canisters stand at the ready. The walls are lined with racks of wine glasses, and the white counter tops contain the latest LCBO releases, all opened and ready. Outside the windows, traffic races by on the Gardiner and the downtown canyons smoke in frigid air. 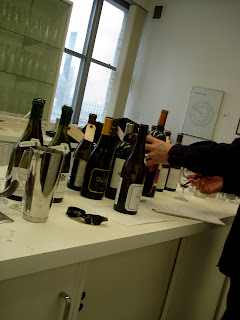 I feel like a rent-a-goalie in the change room before a game. No one knows me; no one knows what I do or how well (or poorly) I do it. Worse yet, it’s clear to me I’m the only non-expert in the room. And yet, there are all those open bottles and a wall full of empty glasses. What else is there to do? I grab a relatively empty spit canister and work my way through the seven available Le Clos Jordanne bottles. There’s actually eight in the room but one, the $60 Grand Clos Pinot Noir, is empty. I’ve arrived at the tail end of a tasting, and it’s clear which bottle received the most concentrated attention. Lesson learned.